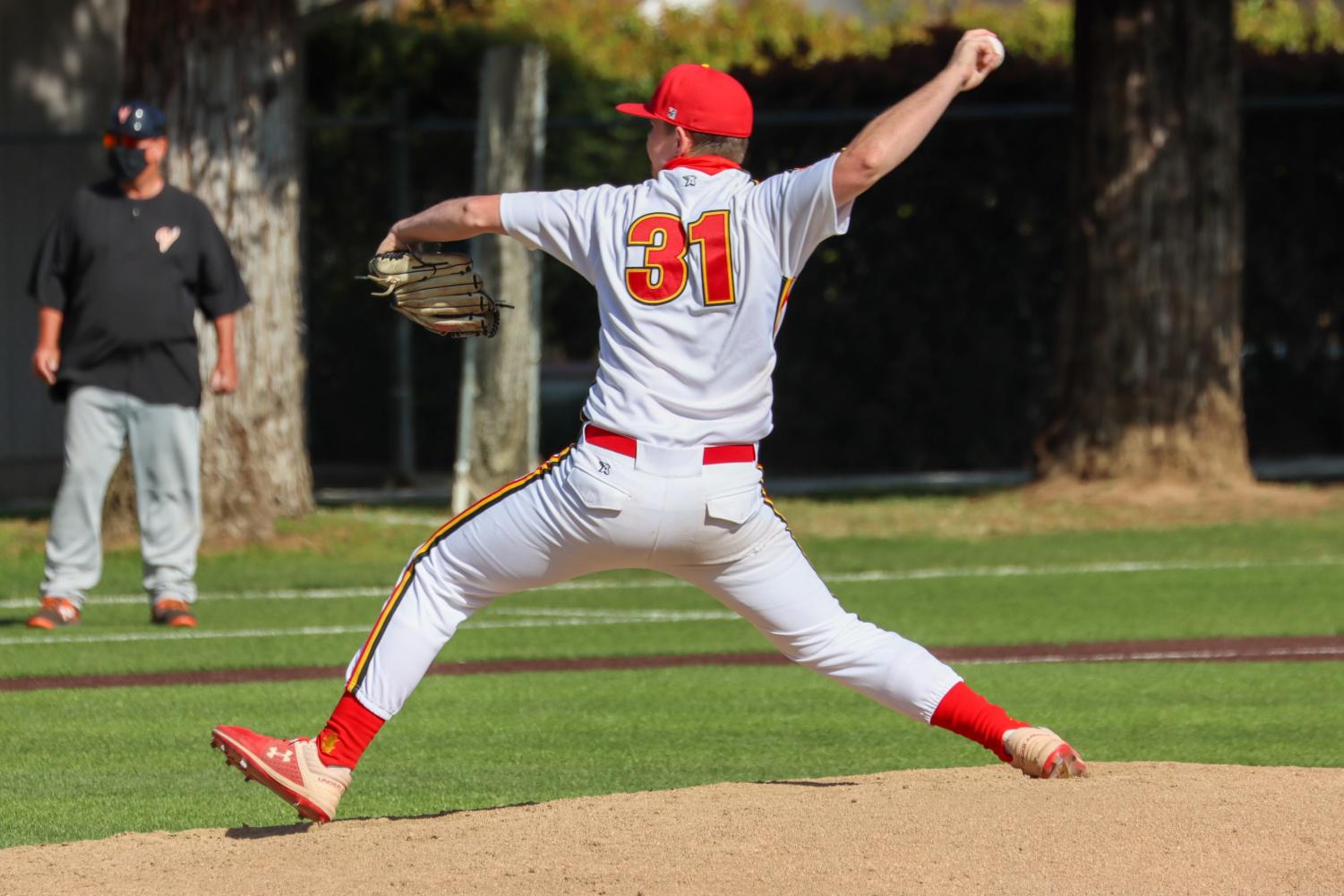 A gifted slugger, a dominant pitcher, and a humble leader, Devon Walczykowski ’21 does it all for Jesuit baseball

With only six players from last season’s team playing this year, the 2021 Jesuit High School Sacramento varsity baseball team was left shorthanded, especially on the pitching side.

Despite being known for his bat, which earned him a scholarship and a spot on Pepperdine University’s baseball team this fall, Devon has arguably been Jesuit’s best pitcher this season.

One of Devon’s top performances on the mound came against Sheldon High School where he pitched a complete-game shutout — striking out seven hitters in an 18-0 Jesuit win on April 29.

For Devon, being the team’s most important two-way player was a challenge he was willing to take on.

“For me, it’s not tough hitting in an important part of the lineup and being a starting pitcher,” Devon said. “I want to do as much as I can to help the team win.”

Devon’s ability to adapt to a new role isn’t surprising as he’s known around the program to be a hard worker who strives to improve his game according to longtime Jesuit Head Varsity Baseball Coach Joe Potulny ’76.

“He has a great sense of what he needs to work on,” Coach Potulny said. “He’s worked hard on his agility, his athleticism, and he’s really good around the bag which I think is something that didn’t come naturally for him. He was a big pull guy, but he matured as a hitter. He can drive the ball the other way now when a pitcher throws an offspeed pitch or a fastball on the outer half of the plate.”

While some might assume a player with Devon’s talent would have a big ego, it’s quite the opposite.

“[Devon] carries himself in a way that most don’t,” said Carsen Keim ’21. “Like Coach Potulny says about him, ‘You could never tell if he went 4 for 4 or 0 for 4.’ He’s someone that doesn’t get too high or too low when something happens to him. He makes the team better with his natural ability, but also through being a silent leader.”

Devon took the same humble approach when deciding to attend Pepperdine for college — making it a priority to join a program with a great coaching staff where he could also receive a quality education.

“There is no better place to be than in Malibu, California,” Devon said. “Being by the beach is where I always imagined myself. The coaches at Pepperdine are great. They are really advanced with hitting technology and they really care about their players. Also, I’m going to get a great education at Pepperdine.”

But even though Devon is excited to continue his baseball career in college, he will never forget the four years he spent at Jesuit.

“These past four years playing at Jesuit has been great,” Devon said. “I’ve made so many memories and friends that will last forever. I’m most thankful for my coaches and my teammates. I wouldn’t be the man I am today without them.”

A silent leader and a hard worker, Devon embodies everything Jesuit’s baseball program stands for and serves as an example of what the school hopes its students will become when they graduate.