Father Tom Lucas S.J. ’70 to give lecture on the arts and Jesuit tradition 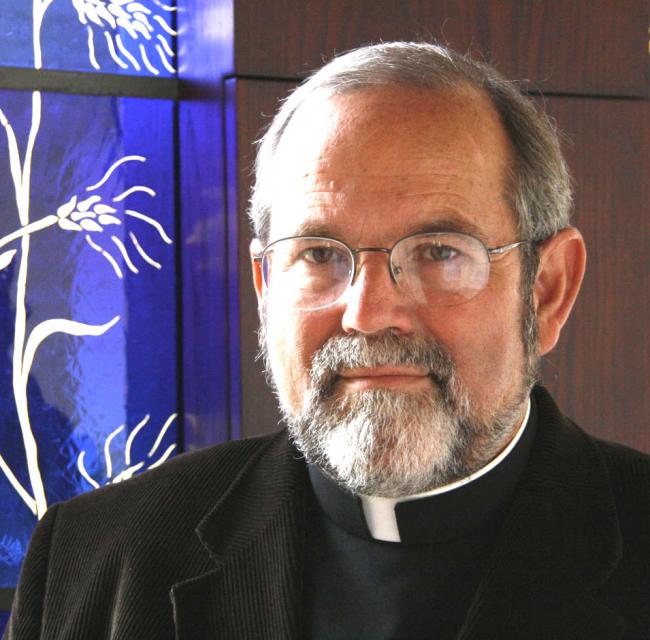 Back at Jesuit High School Sacramento for the first time in 50 years after becoming the pastor at St. Ignatius Loyola Parish, Father Tom Lucas S.J. ’70 will be the guest speaker at the school’s 2nd Annual President’s Ignatian Lecture on Feb. 11 at 7:00 p.m.

Titled “Inspiration, Aspiration, and Imagination,” the lecture is virtual and all members of the Jesuit community can register to watch it through the school’s website.

According to Fr. Lucas, the focus of the speech will be on our imagination and senses, and how “if we keep them at least under reasonable control, … can be places where we can discover the meaning of life.”

Fr. Lucas plans to go in-depth on how art in particular is a major part of the Jesuit tradition and how the Jesuits have always used it to spread their message.

“It’s fascinating … to see how the early Jesuits – from Ignatius on – thought through using art as a strategic tool for communication,” Fr. Lucas said. “It’s not an accident that it happened; they didn’t just stumble into it, they saw the tremendous power of images and imagination and that’s what I’m talking about [in my lecture].”

Fr. Lucas’ appreciation for art sprouted at a young age. His mother would usually take him and his sister to San Francisco once a year. While in San Francisco, Fr. Lucas would see museums, concerts, and other attractions that weren’t as abundant in Placerville, his hometown before he moved to Sacramento in second grade.

While Fr. Lucas liked to see art, it wasn’t until he got to Jesuit that he developed a passion for creating art as well.

“My first art class ever was at Jesuit High with Father Bill Breault S.J.,” Fr. Lucas said. “We didn’t have a studio space so we actually came over to St. Ignatius Grammar School and used a classroom on Saturdays and he taught us how to use watercolors and that was fun. I’ve always loved beautiful things and one of the things I learned from Bill Breault was that I could also make beautiful things and that was a very satisfying occupation.”

Alumni Chaplain Father Edwin Harris S.J., who was a scholastic and a first-year teacher when Fr. Lucas was a senior, remembers Fr. Lucas for his work on the school newspaper, The Plank.

“My primary contact with him was through The Plank,” Fr. Harris said. “He was the Editor-in-Chief in his senior year, and I was the assistant Moderator.  He worked on The Plank all four years. He has a great sense of humor. He was active in Drama for 4 years, and he also was involved in religious and service activities for all 4 years. He was one of the top students in the Class of 1970, and was a member of the California Scholarship Federation (CSF) and the National Honor Society (NHS).”

After Jesuit, Fr. Lucas attended Santa Clara University. It was there that he endured a life-changing event that drove him to become a Jesuit, an idea he had put off for some time.

“In my last year at Santa Clara, my mom died and that kind of shook me up and made me start to think about what the future was going to be,” Fr. Lucas said. “The idea of joining the Jesuits had been in the back of my mind, but I did my best to avoid it for a long time, but [my mom’s death] woke me up to it. My mom was  51 when she died so that made me really think about my life and what I was going to do to make sense out of it. I had known, both in high school and in college, a bunch of Jesuits — really good guys. [The Jesuits] were smart, they were funny, they were easy to talk to, and I thought ‘well I’ll give it a try’ and here I am 46 years later and I’m still at it.”

Since graduating from Santa Clara, Fr. Lucas has traveled all over the place. First, he did a couple of years of basic Jesuit training in California, then two years of studying philosophy at Fordham University before coming back to California to teach at Bellarmine High School for three years.

From there, he spent three years in Rome for Theology prior to being ordained in 1985. Fr. Lucas then went to the Graduate Theological Union in Berkeley. He would return to Rome for his thesis work, doing the restoration of the rooms where St. Ignatius lived and died.

He came back to the United States to write his doctoral thesis and then went to Jesuit’s national office in Washington D.C. where he did communications work. After three years in the nation’s capital, he spent 18 years at the University of San Francisco. There, he started the school’s art program and was the department chair and a professor of art & architecture.

At the request of the provincial, Fr. Lucas became the rector of the Jesuit community at Seattle University in 2013, a role he finished in fall, 2019. During his time off, he traveled to Italy but was stuck there for a little bit due to the COVID-19 outbreak. While he waited in Italy, he got another call from the provincial, this time asking him to step out of academic work and return to Sacramento to be in charge of St. Ignatius Parish. Although he’s the pastor at St. Ignatius Parish, Fr. Lucas is living in the Jesuit Community located in Brebeuf Hall.

Jesuit President Father John McGarry S.J. is happy to have Fr. Lucas back on campus.

“I got to know [Fr. Lucas] when I was serving as the provincial of the California province of the Jesuits and he was working at the University of San Francisco at the time,” Fr. McGarry said. “I was delighted that he was coming here to be Pastor of St. Ignatius Parish.”

Having lived in many different places with experience working in many distinct roles, Fr. Lucas has an extremely unique perspective. With an advanced understanding of the arts and their impact on the Jesuit tradition, Fr. Lucas will surely give an interesting lecture that all members of the Jesuit community should be eager to virtually attend.