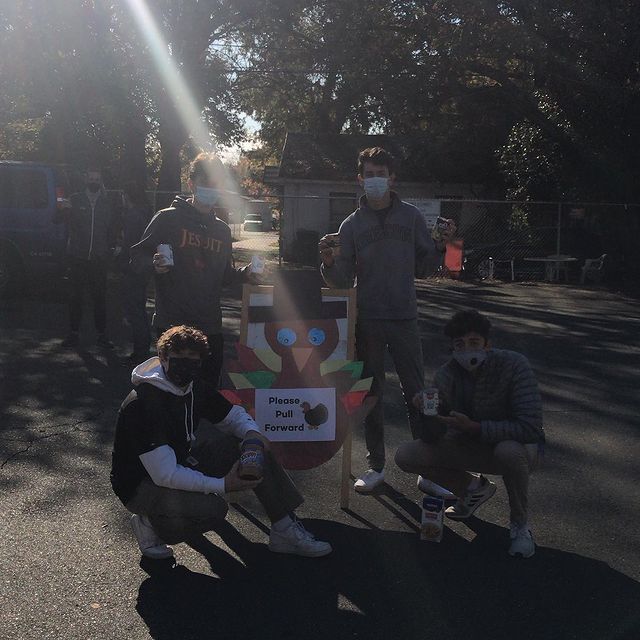 Members of Jesuit's Executive Council at Stanford Settlement for the school's annual food drive on Nov. 21, 2020.

One of Jesuit High School Sacramento’s longest-standing traditions, dating back to its foundation in 1963, is the annual food drive that supports the Stanford Settlement Operation Cratchit Christmas Food Drive.

While the event typically lasts two weeks, allowing students to drop off cans as they arrive at school, this year’s food drive had a different look.

Reduced to a two-day event on Nov. 21 and 22, families were able to drop off canned food directly at Stanford Settlement or donate through an online purchase on Amazon.

Given the uncertain times we are in, helping the poor is especially important this year, something Student Activities Director Mr. Tim Kelly points out.

“Living in a pandemic has certainly impacted some households more than others,” Mr. Kelly said. “Julie Rhoten, the Director of Stanford Settlement, said she had 720 families sign up to receive a Christmas food basket. This number is up from the usual requests. Helping the Stanford Settlement by donating food is an easy way to help those in need. It is a selfless act that is at the core of who I hope Jesuit students are on the way to becoming.”

Executive Student Council President Ronan Brothers ’21 also believes that giving to the less fortunate is as crucial now as it’s ever been.

“I do think it is especially important because so many people are out of work and suffering from hunger and loneliness during the pandemic,” Ronan said. “This is why it is imperative that we help others in this time of need.”

While it’s reasonable to expect the amount donated would be lower than previous years due to the length of the event being shortened, Mr. Kelly still wishes that more people participated.

Despite a lower number of families getting involved, Jesuit and the Stanford Settlement are still extremely thankful to those who donated.