John Catlin ’09, a promising young golfer, hits his stride on the professional tour 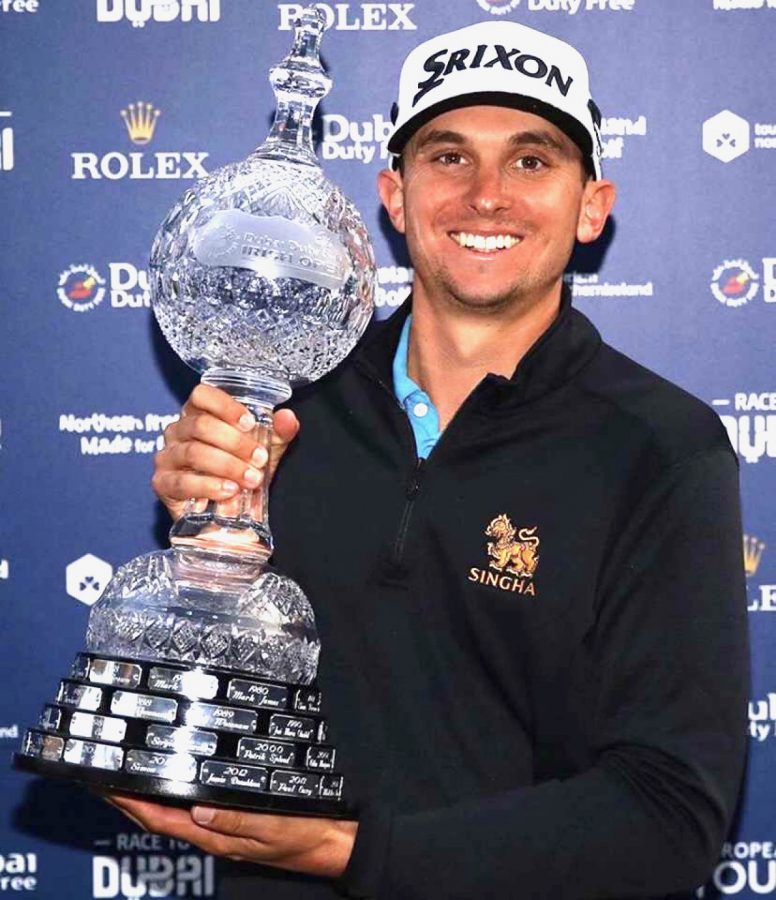 Coming off of a successful Sept. in which he won two tournaments on the European Tour — a feat that earned him Golfer of the Month — John Catlin ’09 has been on a roll lately.

John took first place at the Andalucía Masters and the Irish Open, marking his first two wins on the European Tour. But while his recent success might seem surprising, John succeeding on the golf course isn’t anything new according to his former Jesuit High School Sacramento teammate John Byers ’09.

“He’s always been very good,” Byers said. “I mean he was a grinder — he’s always had a really strong work ethic. Golf was a huge priority for him at all times.”

A three-year varsity golfer at Jesuit, John was a two-time Delta River League MVP and tied for fourth place in the 2009 CIF/SCGA State Boys Golf Championship.

His coach at Jesuit, Coach Kevin Fleming, also remembers how special John was in high school.

“John Catlin had quite a career at Jesuit in golf,” Coach Fleming said. “I believe John may be the most successful golfer ever at Jesuit. When it came to practice, Catlin would practice 3 hours a day, 4 hours a day while he was in high school.”

After graduating from Jesuit, John continued playing golf at the University of New Mexico. Two of his most notable accomplishments at UNM include being named Mountain West Conference Freshman of the Year after the 2009-2010 season and earning UNM Student-Athlete of the Year in 2012. His college career stroke average is the sixth lowest in UNM history and his junior year average round score of 71.83 is the fifth best all-time single-season average at the school.

John began his professional career in 2013, playing on the PGA Tour Canada. He later joined the Asian Development Tour where he picked up two victories, one in 2016 and another in 2017.

While he was already a professional golfer, John didn’t have remarkable success until the 2018 Asian Tour season. That season he grabbed three wins and won the Asian Tour’s Player of the Year honors.

This dominance earned him a spot on the European Tour in 2019, the same tour in which he’s gained attention for his recent wins.

Aside from being known for his excellence on the golf course, John’s also seen as a good person.

“He was one of those guys who was a really good mentor,” Coach Fleming said. “When he was a junior and senior, he was working with freshmen and sophomores. He was born for golf. He loved every part of it.”

And he didn’t stop being a mentor when he left Jesuit.

“He came back and did some demonstrations for our golf team after he graduated,” Coach Fleming said. “He brought Cameron Champ once and the two of them played nine holes over at Ancil Hoffman and had their caddies with them and walked the golf team at Jesuit through the process of how you play.”

While he graduated more than 10 years ago, his name hasn’t been forgotten by current Jesuit golfers. Jack Deaner ’21, a current member of the Jesuit varsity golf team, has hopes of playing professionally one day just like John.

“[John’s success] inspires me in a lot of ways,” Jack said. “It also shows that you can balance school and golf well because [John was] a really good student at Jesuit and then an Academic All American at New Mexico so it shows that Jesuit prepares you to succeed in both the academic and athletic world.”

While many know of John from his skills on the golf course, the mark he left on Jesuit was not only from his athletic abilities but also through his desire to help others and pass on his knowledge of the game to the next generation of Jesuit golfers.