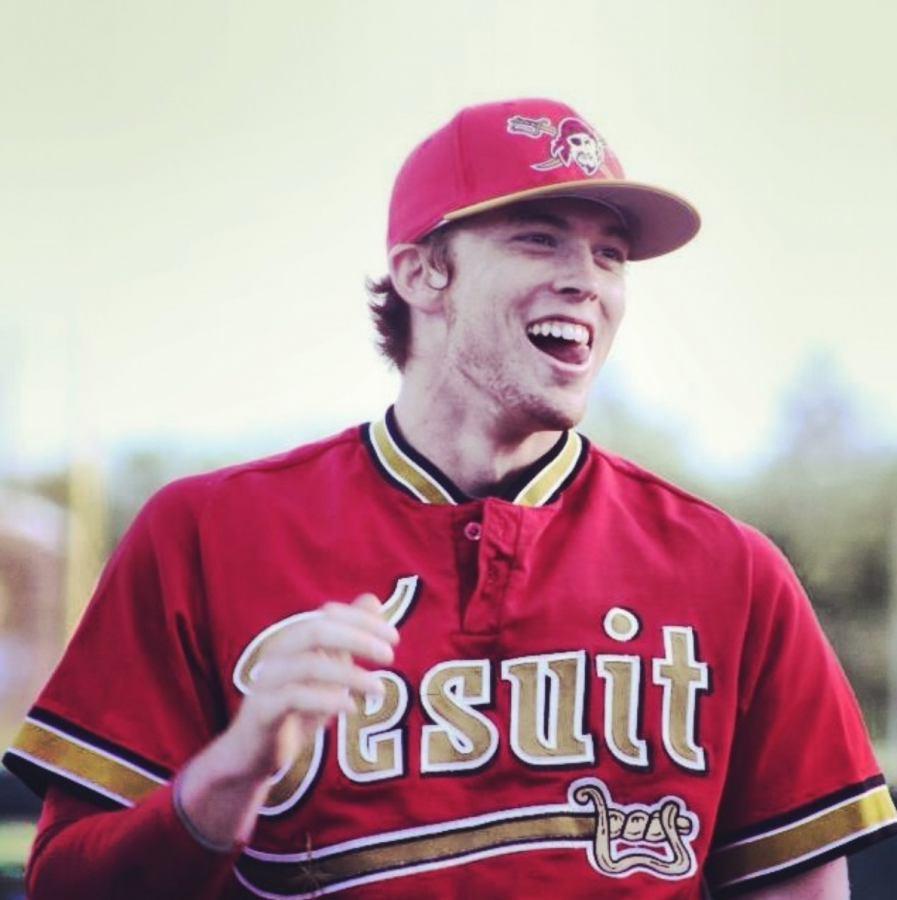 With eight years of professional baseball experience, Jesuit High School Sacramento alumnus Zach Green ’12 hopes to be a member of the San Francisco Giants once or if the baseball season commences.

Green was invited to major league camp in Spring Training as a non-roster invitee and was able to compete for a roster spot, even though he’s not on the club’s 40-man roster.

In the midst of his blazing start to Spring Training, Green’s opportunity to show the Giants why he belongs in the big leagues was cut short. On March 12, Major League Baseball announced the suspension of Spring Training due to the COVID-19 outbreak. The regular season was supposed to start on March 26, but as of April 30, there is no schedule set for the start of the season.

During this time, Green is doing what he can to stay ready.

“I’m working out and doing baseball activities a couple [of] times a week,” Green said. “Without a set date to get ready for it’s impossible to build up reps, so I’m just trying to stay active whenever that date comes.”

Will Green suit up in a big-league uniform when baseball returns? Not even he knows the answer.

“It was too early in spring to be able to tell how the team wanted to start the season roster-wise,” Green said.

While Green has never started the season on a major league roster, he appeared in eight games for the Giants in 2019 after being promoted from the Triple-A Sacramento River Cats.

Green made his major league debut on July 21, 2019. In his debut, Green collected two hits, including a game-tying RBI double in the Giants’ 3-2 win over the New York Mets.

After spending 14 days with the Giants last season, Green was sent back down to Triple-A. A left hip impingement would end Green’s 2019 season as he was placed on the 60-day injured list on September 7.

Having a season cut short due to injury is difficult for any player, but Green is no stranger to missing time. The 2012 third-round pick has undergone surgeries on his wrist, elbow, and hip according to the Sacramento Bee.

Green believes his education at Jesuit helped him overcome the challenges he’s faced.

“Jesuit definitely helped me transition into the baseball world,” Green said. “Playing baseball as a profession is draining on the body but even more so on the mind at times. Just being physically present isn’t enough. You need to mentally show up every day no matter how much you’re struggling. Being at Jesuit helped prepare me in many ways but overall the high [expectations] of the school forced you to buy in and mentally show up if you truly want to succeed.”

“He obviously was extremely talented,” Coach Potulny said. “He walked in as a shortstop as a sophomore and played for three years and was a Gold Glove high school defender — the only Jesuit guy who’s received that award.”

After coaching Green during his three years on varsity, Coach Potulny now enjoys learning from the big-league hopeful and hearing about his experience in professional baseball.

“When [Green and other alumni baseball players] come back to the facility, it’s more me picking their brains cause they’re way ahead of where I am now,” Coach Potulny said. “It’s neat how the former student-athlete is now the teacher of the coach.”

Green isn’t the only Jesuit alumnus with a chance to start the season on a major league roster.

Andrew Susac ’09, brother of Jesuit catcher Daniel Susac ’20 and cousin of Jesuit pitcher Anthony “Tonko” Susac ’21, was invited to Major League camp in Spring Training by the Pittsburgh Pirates. The Pirates invited the elder Susac as a non-roster invitee after he signed a minor league contract with the Pirates over the offseason.

The 29-year-old catcher is playing with his fifth organization. Before the Pirates, Susac played for the Brewers, Orioles, Royals, and was a World Series champion with the Giants in 2014.

Another baseball alumnus is Rhys Hoskins ’11, an established home run hitter for the Philadelphia Phillies. The 26-year-old outfielder and first baseman hit a combined 63 home runs in his last two big-league seasons.

As Major League Baseball searches for a way for games to return, there’s been multiple ideas thrown around including playing games with no fans. While some players were opposed to this proposition, Green just wants to play.

“I’m ready for any type of baseball,” Green said. “I’m sure fans will be disappointed they won’t be able to attend. But the sooner we start baseball, the sooner we may start to feel the world is closer to normal.”

Regardless of what changes are made, it’s clear that Green’s love for the game will help him persevere.