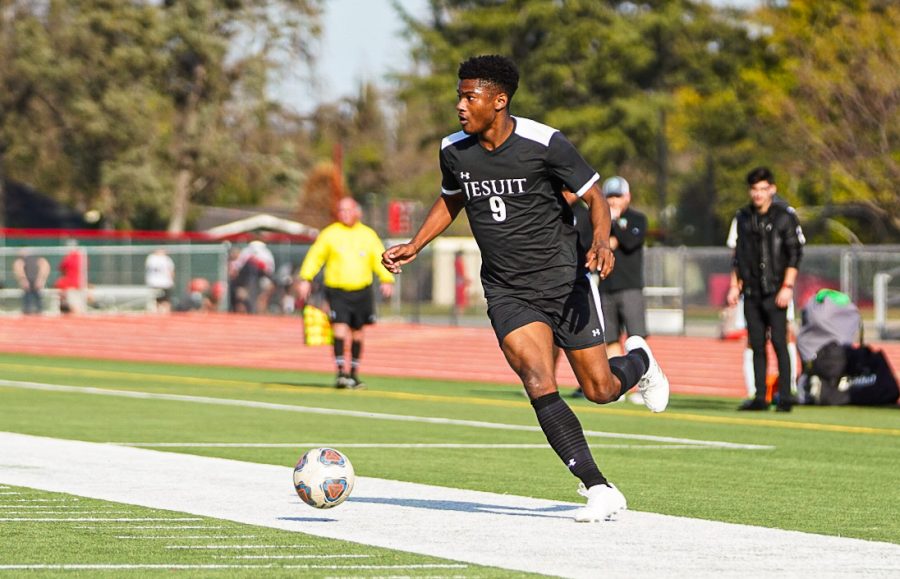 Elijah Beverly '21 dribbling the ball in home game versus Sheldon this season.

With the Division I Sac-Joaquin Section title on the line, top-seeded Jesuit High School Sacramento prevailed over No. 6 seeded Tokay High School in a 1-0 overtime victory at Whitney High School on Saturday, Feb. 29.

The game’s only goal came from Jesuit wing Alexander Leinberger ’20 with three minutes to go in overtime. Alexander scored after a ball kicked by a Tokay defender deflected off his knee and into the goal.

“Our defense was sharp and did a good job shutting them down for the most part,” Joey said. “Jerry had a great game with a few clutch saves.”

While Jesuit came out on top, the players didn’t feel they played to the level expected of the No. 1 ranked team in the state. Striker Elijah Beverley ’21 wants his team to use their mistakes to improve going forward.

“One thing we will take from this game is how important it is to stay connected and work together,” Elijah said. “We were very disconnected in all three of our lines, so moving forward, we know that each line must be in sync with the other.”

After winning a section title, Jesuit will play in the Division I CIF NorCal Soccer Regional Championships as the No. 1 seed.

Heading into the NorCal Championships, Jesuit will likely be without its leading goal scorer Matt Kahn ’20, who left the section championship with an injury.

“Matt Kahn, who is our leading scorer, had a minor hamstring issue going into the game,” Coach Rose said. “He strained it during the second half of the game and probably is out for NorCals.”

The Marauders host the No. 8 seeded De La Salle High School Spartans at 3 p.m. on Tuesday, March 3, in the first round of the Nor-Cal playoffs.