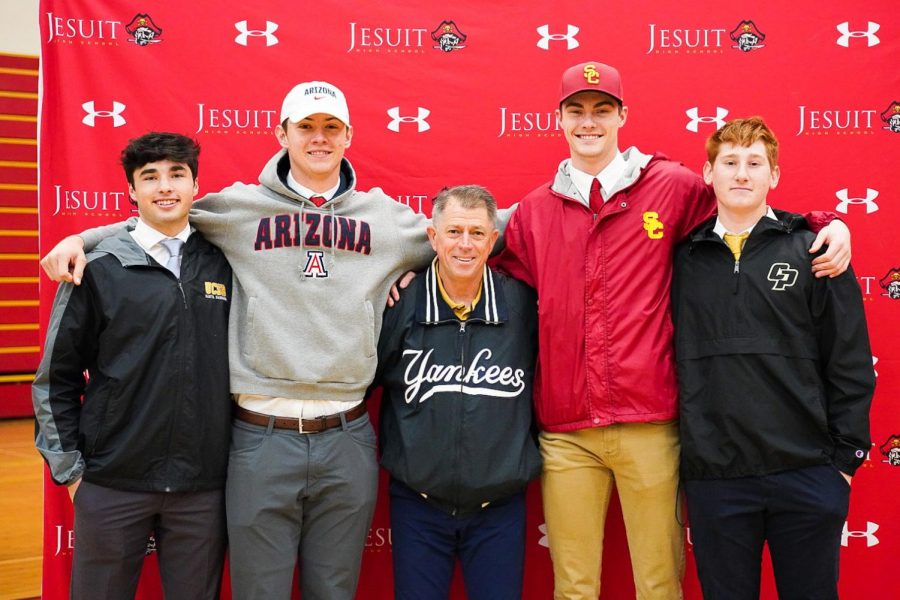 It was National Signing Day, and family, friends, coaches, and alumni all arrived at 8 a.m. to celebrate the school’s signing seniors.

For Hunter Modlin ’20, who signed to Saint Mary’s College of California to play rugby, having friends and family in attendance meant a lot.

“Signing in front of my friends and family was awesome,” Hunter said. “My family has supported me so much in the last four years, taking me to all-star tournaments across the country and even to Ireland at one point for a USA representative team. They have been amazing.”

“I chose to sign to Portland because, of all the schools I visited, I liked the guys on the team and the coach the best,” Matt said. “Coach [Rob] Conner is very similar to Coach [Walt] Lange in his coaching style, and he expressed a lot of confidence in me the first time we talked which I liked. The immersion I went on was to Portland, so I know the city pretty well, and I have a bit of a connection to it from that trip; cross country nationals and the Nike elite camp is also in Portland, so over the past four years, I’ve ended up in Portland a lot, and I liked the on-campus vibes. It felt like if Jesuit was a college with girls which to me seems perfect.”

After winning the Division I Sac-Joaquin Section Championship this season, water polo player and UC Davis signee Ivan Soshnikov ’20 has lofty goals for himself as he continues his athletic journey in college.

“As I continue to play water polo in college, my biggest goal is to win a national championship,” Ivan said. “I want this unique team environment to continue. For me personally, I hope to become as skilled as possible. I want to prepare myself to potentially play at the national and even professional level.”

Members of the Class of 2021 will have an opportunity to be celebrated on next year’s National Signing Day, Feb. 3, 2021.