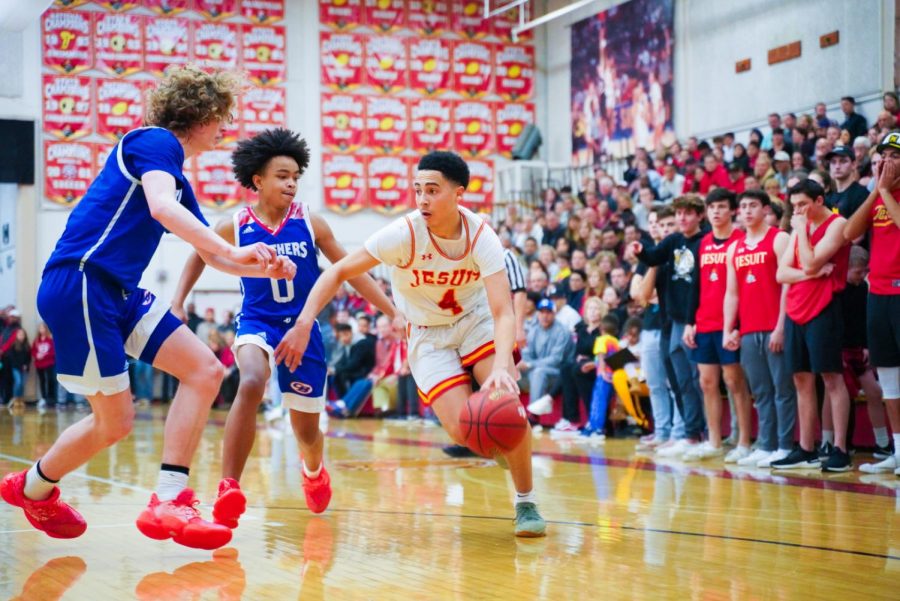 In arguably the Sac-Joaquin Section’s most thrilling game this season, the Jesuit High School Marauders pulled off a 60-59 overtime win against the Christian Brothers High School Falcons on Saturday.

The win marks Jesuit’s fifth consecutive victory against its longtime rival and improves the team’s record to 10-3.

The game was decided at the free-throw line as Christian Brothers had a chance to potentially send the game into double overtime by making one of its two free throws. Neither free throw was made, and as the buzzer sounded, Jesuit students rushed the court in celebration.

Jesuit was without two of its starters, including four-star recruit guard Isa Silva ’21, who was sick according to Athletic Director Mr. Hank Weinberger.

With Isa out, fellow backcourt partner Chris Holley ’21 acted as the team’s primary ball-handler, finishing with 13 points and 13 assists.

While Chris understood his role would be crucial in the contest against the Falcons, his focus wasn’t on being the hero, but rather a team player.

“We knew, with Isa out, we all had to step it up a notch,” Chris said. “It’s moments like this when you have to remind yourself as a player that basketball is a team sport, and as long as we play as a team, we would be OK.”

“Chris has been doing a great job all year for us,” Coach Kelly said. “He has improved tremendously since last year. I have complete confidence in Chris to lead our team. The game against CB was a huge moment for him to experience what it is like to lead a team in a big game. I’m glad he got that experience as it will only help his development.”

While Jesuit’s lack of depth thrusted Chris into a leadership position, guards Jayden Teat ’23 and Khalil Layugan ’21 also got a chance to play important minutes and compete under pressure.

“The game was a great opportunity for some players to assert themselves and try out a new role on our team,” Coach Kelly said. “Guys stepped up and did not shy away from the challenge. I think this shows our players work hard to prepare themselves for such situations, and they trust each other, and they trust our system.”

Jesuit hosts the Granite Bay High School Grizzlies on Tuesday, Jan. 7, and the Cosumnes Oaks Wolfpack on Friday, Jan. 10. Tipoff for both games is 7 p.m.