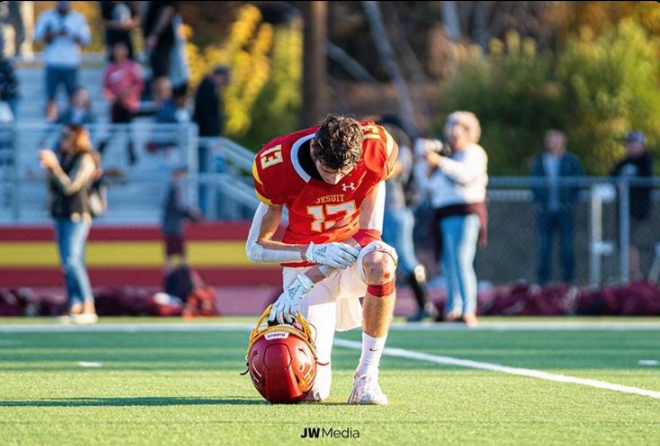 With a chance to play for a Section Championship, the No. 4 seeded Jesuit High School Marauders suffered a heartbreaking 20-17 loss to the No. 9 seeded Whitney High School Wildcats in the Sac-Joaquin Section Division II Semifinal on Saturday.

It was a 38-yard field goal from senior kicker Zach Shreiner with a minute to go that sealed the victory for WHS. After Jesuit failed to get a first down on its last possession, Whitney took a knee, running the game clock down to zero.

WHS’ two touchdowns came from junior quarterback Eli Brickhandler, who scored on 2- and 1-yard runs in the first quarter.

Jesuit quarterback Daniel Susac ’20 threw one touchdown, finding wide receiver Nate Lewis ’21 in the endzone for a 6-yard score in the second quarter. Running back Ace Saca ’21 had Jesuit’s other touchdown, a 4-yard run in the fourth quarter.

Jesuit Scout and Film Coordinator Jonathan Isaac believes his players did what they could and attributes the loss to Whitney’s talent and determination.

“In any game, there is a winner and a loser,” Coach Isaac said. “Unfortunately, we didn’t win. Whitney deserves all the credit for their commitment and effort throughout the game. I love and respect the effort our players and coaches gave today. It just was not our time.”

“We have to applaud Whitney,” Carsen said. “They played a great game and deserved to win.”

While the team’s juniors and sophomores will have to wait another year for a shot at a Section Championship, the loss marks the end of high school football for its seniors.

Wide receiver Jagger Saca ’20, who injured his shoulder after being hit while attempting to catch a pass in the fourth quarter, wasn’t ready to give up on his team, especially in what ended up being his final game for Jesuit.

“My teammates were the reason why I kept going,” Jagger said. “I was hurting, but the team needed me. I would do anything for any one of my teammates. All of us went through so much together this season, and I will always fight for them no matter what.”

After defeating Jesuit, WHS plays No. 6 seeded Elk Grove High School for the Section Championship this Friday at Hughes Stadium.