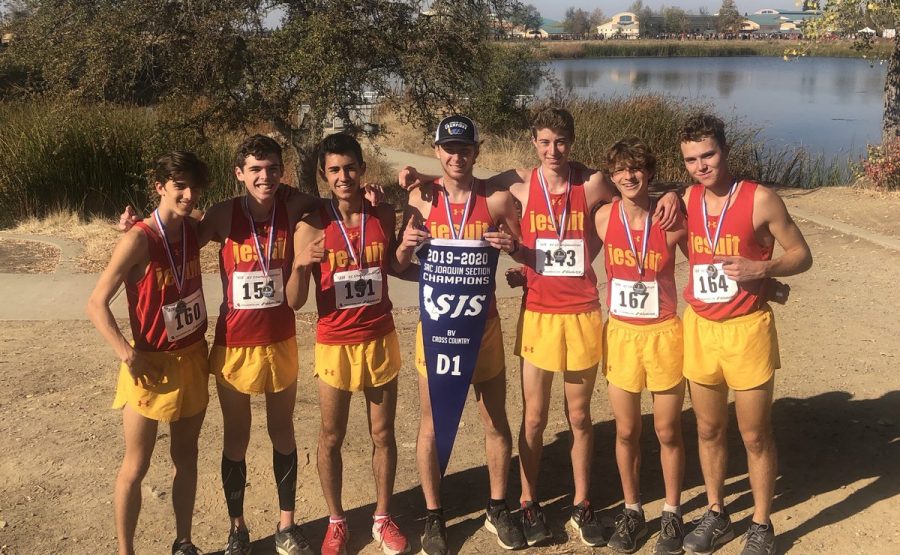 The Jesuit High School Marauders were victorious at the Division I Cross Country Sac-Joaquin Section Championships at Willow Hill Reservoir on Saturday, Nov 16.

The win marks Jesuit’s 28th Sac-Joaquin Section Title and the school’s 11th in Division I, tying Davis High School for the most Cross Country Championships in Division I.

Jesuit was led by nationally-ranked Matt Strangio ’20, who finished first in the 5,000-meter race with a time of 15 minutes, 25.9 seconds.

Matt’s performance is noteworthy, but Jesuit was dominant as a team. All seven of Jesuit’s runners finished in the top 13.

“We had a very good week of training leading up to the race, and we felt confident going in,” Matt said. “Having Coach Lange as a coach means going into every race knowing you’ve had the best possible training and are more prepared than every other team in the race which is a big confidence boost.”

“The win at sections was a huge morale booster for our team, especially with all of the hard work we’ve been putting in over the last couple months,” Braden said. “It really gives us more confidence going into the state meet.”

While runner Nicholas Salonites ’20 is happy to have won the section title, he wants his team to remain focused on what’s ahead.

“My team and I are extraordinarily excited to have won the 2019 [Sac-Joaquin Section Championships] and see the work we’ve been putting in all season reflect in a section banner,” Nicholas said. “However, we view our victory this past weekend only as a stepping stone to the State Championship where we look to assert ourselves as one of the top teams in California.”

The CIF State Championship is Nov. 30 at 1 p.m. down in Woodward Park, Fresno.