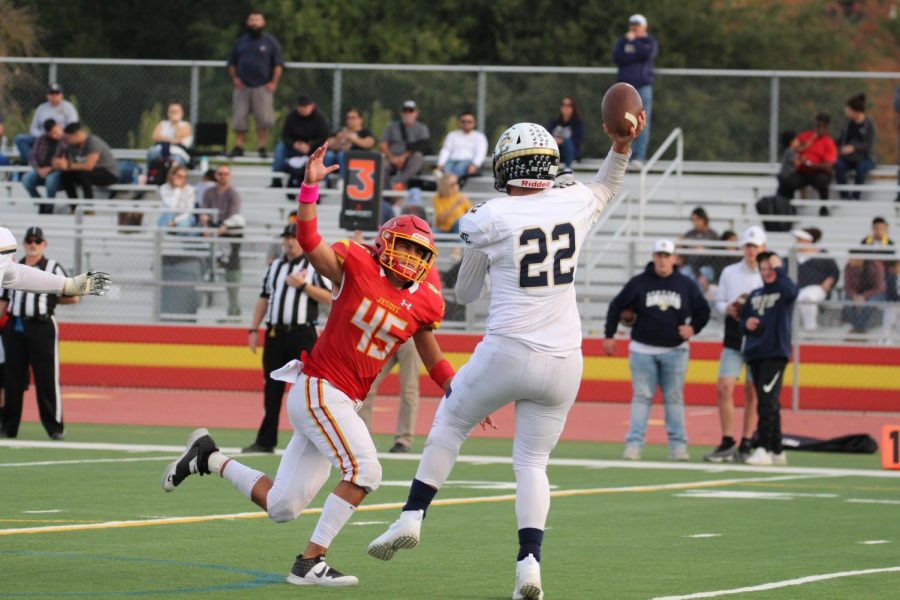 Coming off a first-round bye, the No. 4 seeded Jesuit High School Marauders defeated the No. 5 seeded Central Catholic High School Raiders 49-28 in the second round of the Division II Sac-Joaquin Section Playoffs on Saturday, Nov. 16.

The Marauders got off to a blazing start, scoring on the first play with a 68-yard touchdown pass from quarterback Daniel Susac ’21 to wide receiver Nate Lewis ’21. Jesuit would score twice more before CCHS answered with three consecutive touchdowns, tying the game at 21.

With momentum shifting in CCHS’ favor, Jesuit turned to its defense for support. Under relentless pressure, CCHS senior quarterback Dalton Durossette threw three interceptions and had the ball stripped from him by safety Garrett McGriff ’22.

Energized by its defense, Jesuit’s offense came back to life, scoring for the first time in more than a quarter on a 3-yard touchdown run from Noah Clay ’21. From there, Jesuit stuck with the run, scoring four straight rushing touchdowns.

Jesuit wide receiver Jacob Hall ’21 says the switch to a run-heavy offense was a reaction to an adjustment to CCHS’ defensive scheme.

“We were able to capitalize with the pass game early on when [CCHS] loaded the box and then run under them when they started dropping more defenders into pass coverage,” Jacob said.

One of the key players in Jesuit’s rushing attack was running back Ace Saca ’21, who scored on runs of 2 and 25 yards. Ace credits his performance to his coaches and teammates.

“The coaches gave us a great game plan and put us in a great position to win,” Ace said. “The offensive line was also creating big holes, allowing me to get into open space.”

After defeating CCHS, kicker Ryan Young ’21 believes his team has what it takes to go deep in the playoffs as long they remain focused.

“What we can take away is that we know we have the ability to go far and be successful,” Ryan said. “We just need to lock in during practice and during the game.”

Jesuit will host No. 9 seeded Whitney High School in the semifinals, a team that shocked the Sac-Joaquin Section by defeating rival No. 1 seeded Rocklin High School last week.