Jesuit looks to hold off Wolfpack 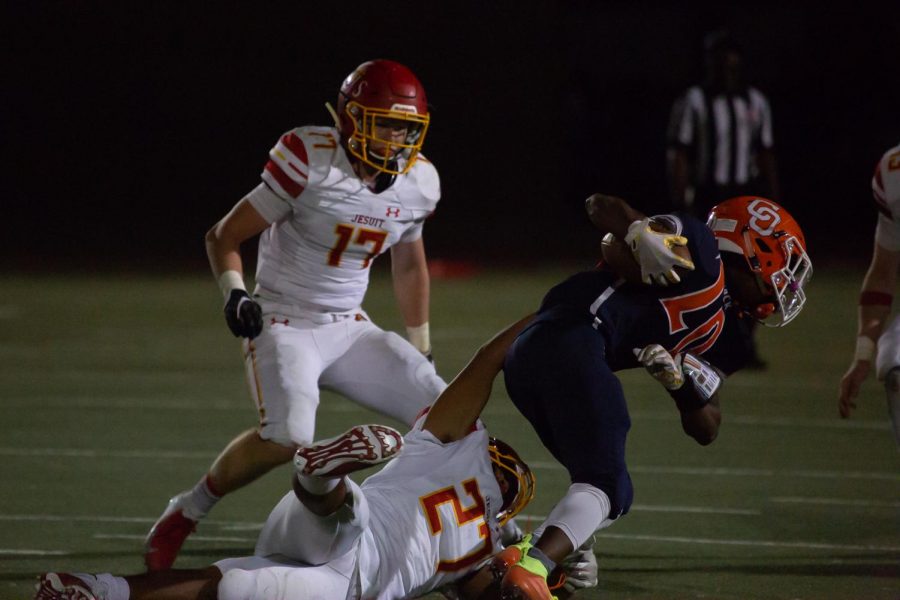 Just in time for Homecoming, Jesuit High School takes on the Cosumnes Oaks High School Wolfpack this Saturday with the contest shaping up to be a tense game.

The season started out rough for Jesuit, with the Marauders losing their first three games, including the Holy Bowl. Recently, though, the Marauders have been making a comeback with a decisive 45-15 victory against Rio Americano High School and the defeat of the Franklin High School Wildcats with a score of 34-14.

COHS, however, looks to be one of the Marauders’ toughest opponents yet. So far, the Wolfpack have a 5-1 record with their only loss being to Capital Christian High School. Aware of their talent, Jesuit Scout and Film Coordinator Jonathan Isaac knows his team will have to pull out all the stops.

“Our team needs to prepare for their physicality and speed,” Coach Isaac said. “Cosumnes Oaks presents a unique combination of size, speed, and athleticism. They also play with a lot of passion and love for the sport of football. ”

The Marauders’ plan goes beyond just playing hard. Quarterback Daniel Susac ’20 has studied the tactical aspect that goes into a victory in football.

Wide receiver Jacob Hall ’21 also emphasized his team’s preparation as being key to win on Saturday.

“In order for success, our defense needs to improve upon knowing assignments,” Jacob said. “The offense has improved tremendously and will continue to improve throughout the season.”

This Homecoming game is not one to miss, so come out and support the team this Saturday at 2:00 p.m. at the Jesuit Stadium. Tickets can be purchased from the Jesuit Website.