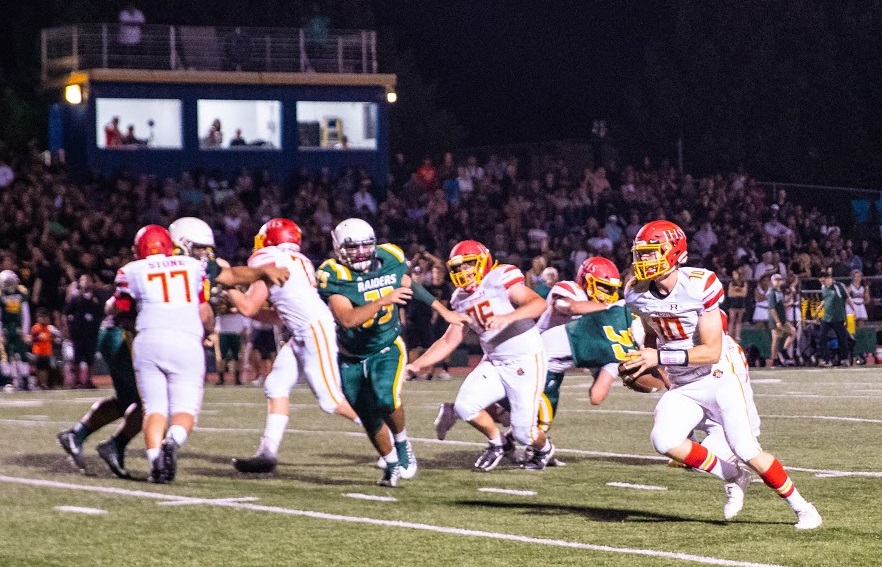 After three straight losses to start off the season, the Jesuit High School Marauders faced their neighborhood rivals, the Rio Americano High School Raiders. A fourth straight loss would have dimmed any hope of a successful season.

Fortunately, quarterback Daniel Susac ’20, who has been sidelined all season due to injury, returned to Jesuit’s offense. With Susac in command, the Marauders scored six touchdowns against Rio en route to a 45-15 blowout.

In his return game, Susac was happy to lead his team to a win, especially against the Raiders.

“I thought it was fun,” Susac said. “Obviously, it’s good to get a win against Rio. Everything was working. Our passing and defense showed up.”

Susac wasn’t the only one glad about his return; his teammates reciprocated those same feelings.

“Susac is a big leader on our team, and having him back gave our team a huge boost of confidence,” said running back and safety Kai Santos ’22.

“[Susac] is a very smart player with one of the best arms in the city,” Saca said. “He reads the defense well and knows how to find open receivers and get the ball to them.”

Despite the focus primarily being on the Marauder’s current situation at the quarterback position, the team’s receiving corps also had an excellent night.

One notable performance came from wide receiver Jacob Hall ’21, who had the flu but still managed to catch a touchdown pass in the first quarter to give the Marauders a 14-0 lead.

With their star quarterback back under center, the Marauders seem to have found a recipe for success, which is crucial as the team begins their Delta League season next Friday, Sept. 27, against Franklin High School.

The varsity game begins at 7:15 p.m. and will be played at Cosumnes Oaks High School.