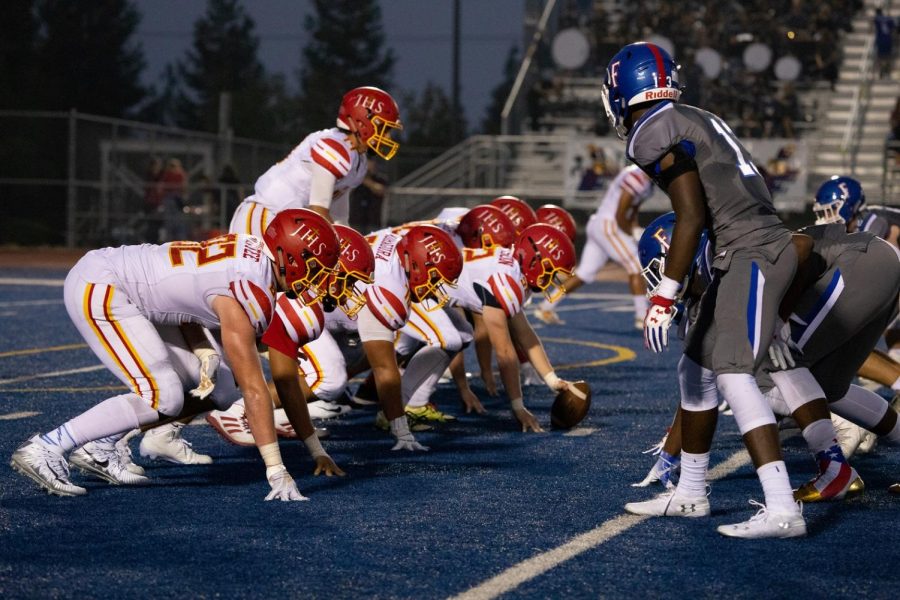 Photo by Connor Bunker '20 | The Plank

Already facing the area’s best team, the Jesuit High School Marauders will deal with an even greater challenge on Friday against Folsom High School as star quarterback Daniel Susac ’20 will not play due to an injury.

Daniel confirmed Monday night that he will miss six to eight weeks with an undisclosed injury. This is a major loss for the Marauders as Susac was on The Sacramento Bee’s list of quarterbacks to watch this season.

With Daniel likely to miss extended time, either Jacob Peluso ’21 or Charlie King ’22 will take over the role of starting quarterback for Jesuit.

Even before Daniel went down, Folsom was favored to win. The Bulldogs, ranked No. 25 in the nation, finished last season with a 14-1 record and won the Division 1-AA California Interscholastic Federation State Championship.

Besides regularly being one of the best teams in the country, Folsom is also known for producing some of the nation’s best players as they’ve matriculated more than 30 players to NCAA Division I schools this decade.

That number will only rise as Folsom’s current roster is filled with top-level talent including seniors Elijhah Badger, ranked as the No. 6 wide receiver in the state, and Daniyel Ngata, who is slotted at No. 2 among California’s best prep running backs.

As the Marauders prepare to battle the Bulldogs, Jesuit Scout and Film Coordinator Jonathan Isaac emphasized preparation as the key to victory.

“Our team needs to prepare both physically and mentally,” Coach Isaac said. “Mentally, we need to understand our roles and assignments. Physically, we need to block, tackle, and take care of the football.”

Running back Kai Santos ’22 also believes that if players follow their assignments, Jesuit will have success.

“Folsom is a very good program,” Kai said. “I think in order to beat them we need to come in with our heads up, and for everyone to do their job.”

The Marauders, looking to begin their season on the right track, will need their fans to get as hyped as possible to energize the team. Jesuit lineman Aiden Singh ’21 wants the student section to be rocking with spirit.

“We will be playing as hard as we can, so we will need our fans to show up and support us,” Aiden said.

Come out to Hornet Stadium this Friday at 7:30 p.m. and support the Marauders as they try to upset the Bulldogs.