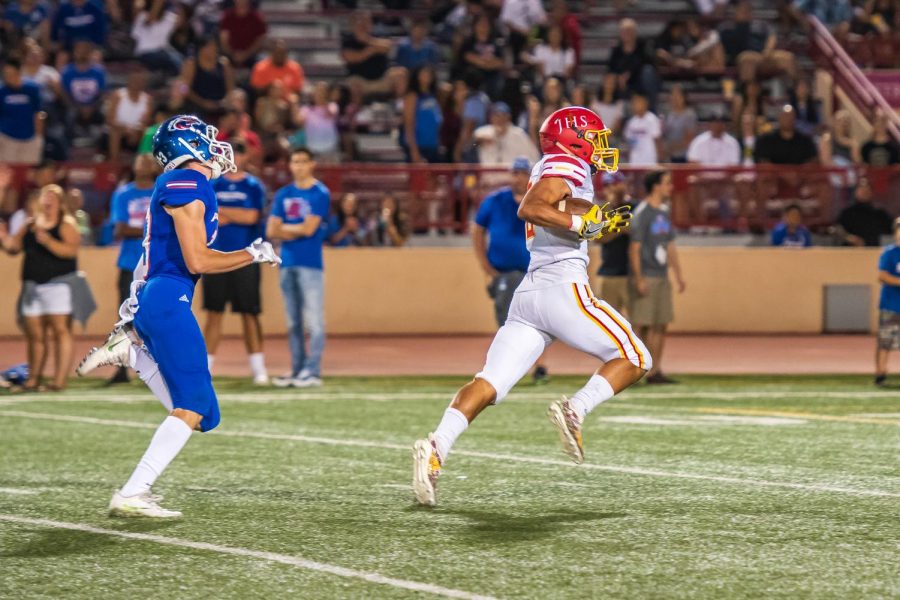 With football season approaching and preseason rankings being released, many are counting out the Jesuit High School Marauders.

Heading into the season, the Marauders aren’t even listed as a top 10 team in the greater Sacramento area despite finishing last season with a 5-1 Delta League record and making it to the semifinals of the Division II Sac-Joaquin Section Playoffs.

Jesuit’s stellar 2018 season ended when it was disqualified from the Sac-Joaquin Section Playoffs for accidentally using an ineligible player in their 49-7 round one victory against Woodcreek High School. Jesuit self-reported this unintentional rule violation but nevertheless suffered a penalty.

After an abrupt end to their season, the Marauders are focused on returning to the playoffs.

“The topmost goal for us is sections,” said right guard and defensive tackle Carsen Keim ’21. “As a team, we expect to come together as a unit and play with unmatched chemistry.”

As the Marauders prepare for the season, Jesuit’s new athletic director, Hank Weinberger, is proud of the work his team has put in.

“The coaches and players worked really hard this spring and summer,” Mr. Weinberger said. “We have a good group of guys who are committed to the team and the program. We also have a phenomenal coaching staff led by Coach Blanton, who is very knowledgeable about football, which will help our guys succeed.”

To open the season, the Marauders will battle the Folsom High School Bulldogs at Sacramento State. Folsom, ranked No. 25 in the nation, has proven to be a difficult matchup for Jesuit in recent years. They have defeated the Marauders in their last three meetings.

Although Folsom’s national ranking and roster can be quite intimidating for opposing teams, Jesuit tight end Cooper Shults ’20 doesn’t want his teammates to be scared.

“Our team needs to not be afraid of the perceived image of Folsom,” Shults said. “Our coaches have told us that we’re more than capable of beating them, and we just need to believe that.”

The season opener between Jesuit and Folsom is at 7:30 pm on Friday, Aug. 30, at Hornet Stadium. Come out and support the Marauders as they look to upset one of the nation’s best teams.