Art of an Ignatian life 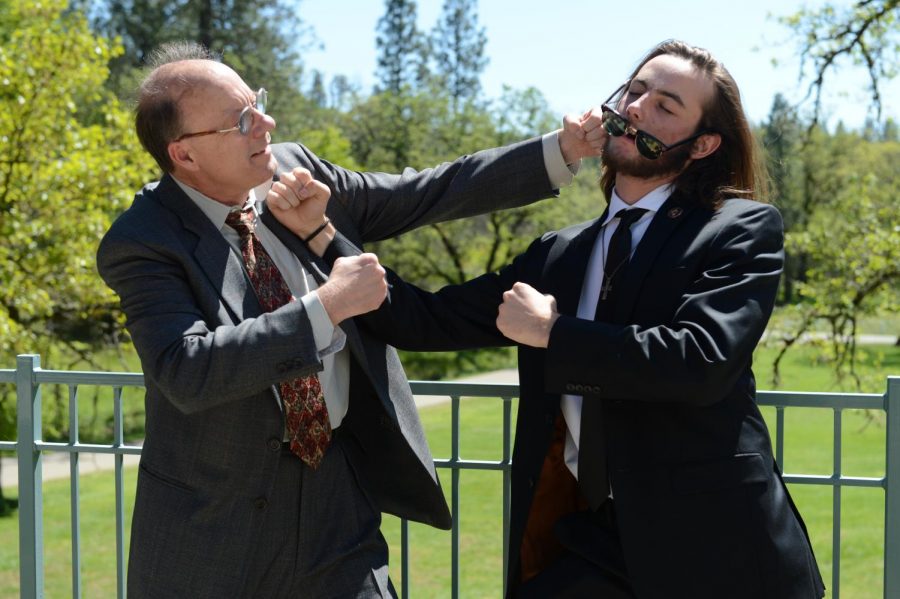 David Bischoff '79 poses for a playful picture with Travis Bell '16 on Kairos 130.

A celebrated art curator who attended Jesuit High School and later came back to teach art and art history for 26 years, Mr. Bischoff has spent countless years cultivating not only his love for the arts, but his expression of an Ignatian education.

Mr. Bischoff’s journey into the art world began slowly. Though he was more interested in sports as a child, artists like painter Wayne Thiebaud and personal influences like his mother helped him develop an initial interest in the arts. When he later attended Jesuit, Mr. Bischoff decided to do something that would ground his life in the art world.

“I worked every day after school, saving to buy a Porsche, but on a junior year whim, I ‘blew’ my nest egg on a picture by Joan Miró, the Spanish surrealist,” Mr. Bischoff said. “I had seen his paintings in museums and thought they looked cool. [I] sold the work two years later and paid for college. I was hooked on the arts.”

Mr. Bischoff attended Sac State where he solidified his interest in art. Although he studied rhetoric and British literature, he also took art history classes and learned about the art market after he found that he could buy and sell artwork. He would later go on to earn a Master’s in art history.

“Those were exciting years, especially working with art department faculty in the university art galleries,” Mr. Bischoff said. “I met artists, curators and collectors throughout the United States and Europe. And I did very well buying and selling art.”

In 1984, Mr. Bischoff soon landed the first show he would curate for: The Royal Chicano Air Force Mural Show. With the support of the group’s co-founders, José Montoya, Esteban Villa and Ricardo Favela, Mr. Bischoff opened new doors in his field. Institutions like UC Davis and San Jose State began inviting him to collaborate on exhibitions.

Six years after his first show, however, Mr. Bischoff returned to Jesuit. Wanting to give back to the institution that taught him, he donated one year to teach students. After numerous requests to remain on faculty a year later, he decided to stay on and teach for 25 more years.

“There were some great years, and there were some tough years,” Mr. Bischoff said. “But the strength of Jesuit is in its faith-based community. For me, it was always about the people. I found co-leading Kairos retreats and Christian Service immersions to be great complements to classroom teaching.”

During his time at Jesuit, Mr. Bischoff taught a number of art and art history classes. Rooted in the Socratic method and Ignatian pedagogy, he based his lectures on constantly questioning his students, displaying pictures of art he took around the world, and showing physical artwork to his students.

Paralleling his work in Latino art and culture, Mr. Bischoff also sought to expose students to art outside the European tradition, as exemplified by his Art of Diverse Cultures (ADC) class.

“Too often Mexico and the Americas, Asia and Oceania, Africa and the Middle East — and indeed contemporary American diversity — are not included as co-equals,” Mr. Bischoff said. “Art and culture belongs to all of us. What was special about ADC was being able to make core skills seem fun and diverse cultures familiar.”

Grant Gini ’19, one of the last students to take ADC before Mr. Bischoff left Jesuit, noticed that Mr. Bischoff would always talk about his art with “great depth and passion.”

“He would make class exciting by going off onto little tangents surrounding the art that made it much more interesting, rather than just getting straight to the point,” Grant said.

Soon enough, Mr. Bischoff’s deep passion would inspire his students as well. Some of them, like Gregory Woollgar ’13 [see page 10], went on to devote their life to the arts, while others, like Grant, were inspired enough to even take a summer college course on Prehistoric to Middle Age art.

“David Bischoff was an incredible teacher […] who inspired many Jesuit students into the field of art and art history,” said Matthew Woollgar ’15, Gregory’s brother. “He was an incredible lecturer and really opened our minds to new ideas and different cultures like I had never before in life.”

Although he left Jesuit in 2016, Mr. Bischoff has not stopped working. Currently, he acts as a board member of the Latino Center of Art and Culture, “advancing cultural equity in the arts in the greater Sacramento region and beyond.”

Indeed, you don’t meet a man like Mr. David Bischoff often. His passion for the arts has set the world on fire, and by weaving the Ignatian values into his work, he will leave behind a history of a life that is as beautiful and inspiring as art he has seen, collected, and taught.