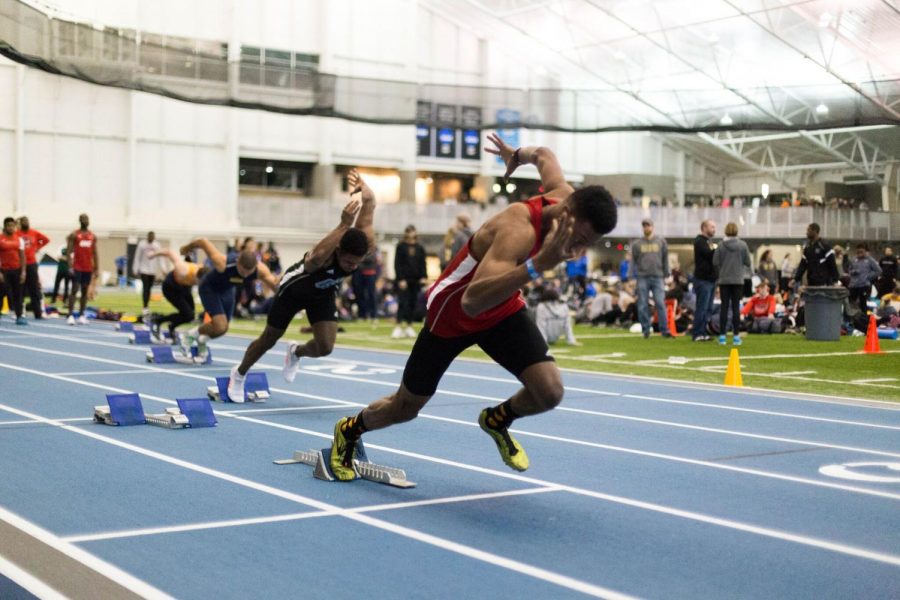 Stephan Reynolds ’16 starts every morning at 6 a.m., lifting in the weight room at Lewis University with his track & field teammates. Such dedication has become a common refrain in Stephan’s story.

Finishing his junior year at Lewis University, Stephan holds top three finishes in the 4×400 meter relay, 400 meter dash, as well as the 100 meter and 55 meter dashes. While he is very successful, running at the collegiate level has challenged Stephan’s work ethic.

“Everyone has put their everything into getting recruited to a collegiate sports team, so many of the individuals you come across will be just as fast if not faster than you are,” Stephan said.

Before making his name at Lewis University, Stephan took his first steps as a competitive runner on the track at Jesuit High School. Eventually, thanks to his hard work and determination, Stephan became one of Jesuit’s top sprinters and the owner of the third best time in the 400 meter dash.

Just as he left a legacy at Jesuit, Jesuit’s track and field program left a lasting impression on Stephan.

“[B]eing a track & field athlete was one of my most favorite memories, not only because of the long-lasting friendships I made but also because of the many life lessons the sport prepared me for,” Stephan said.

At Jesuit, Stephan was more than just a fast runner; he was also a valuable member of Jesuit’s Band program.

“Stephan’s work ethic led him to add value to every team he was a part of, including the Marauder Band, not only as a trumpet player but as percussionist and a student leader,” said Jesuit’s instrumental music director, Mr. John Cargile.

On the track field and in the band room, Stephan’s dedication to hard work helped him grow as an athlete, a musician, and as a leader. With the confidence to motivate those around him, he left a lasting impact on his peers.

“[His] words motivated me to become a better athlete and person by allowing me to see potential I didn’t even see in myself,” said four-year track & field runner and band member Ashton Retodo ’19.

Stephan’s leadership is inspiring to those around him. He hopes to utilize this talent beyond his track and field career.

“From a competitive standpoint I no longer see myself competing, although I would love to coach one day to help develop young athletes reach their maximum potential.”

Stephan is currently studying aviation flight management with an intention to become a pilot for the United States Marine Corps. And although he won’t run competitively after the collegiate level, Stephan’s leadership will surely continue to light the way for all those who cross his path.