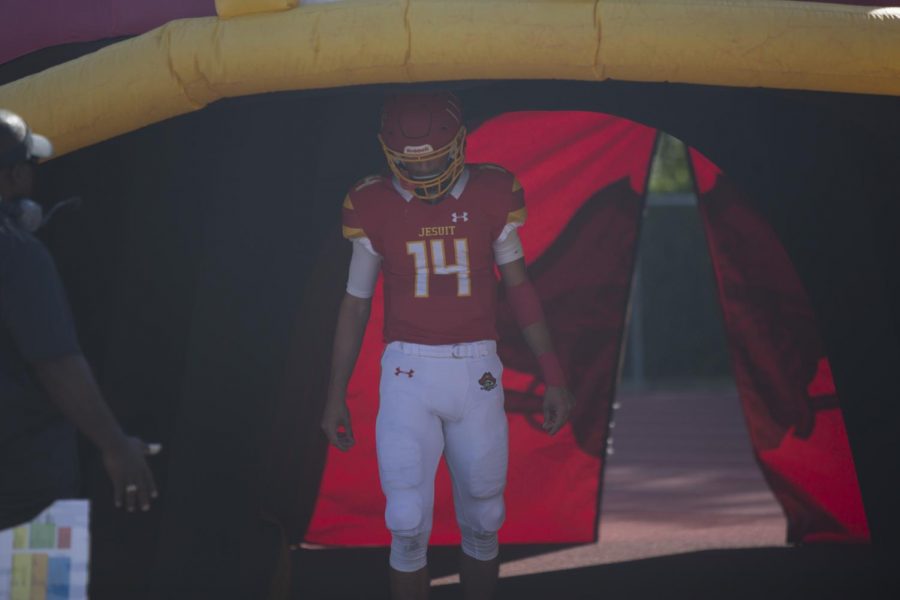 Jesuit High School will always be a second home to Hank Harvego ’19.

Jesuit is the place where Hank grew as a football player and learned about balancing his workload as an honors student.

“Football has helped me tremendously during my time at Jesuit,” Hank said. “From the lessons of hard work and dedication to time management, every aspect Coach Blanton instills in us can be applied to life. Being busy with workouts and film sessions helped me stay on top of my workload, which paid off in the long run.”

His perseverance to succeed and stay on track landed Hank an academic scholarship to play football for Division III Claremont McKenna College.

Hank’s dedication to the football team was reflected in how hard he pushed himself and teammates. His leadership on the field motivated his teammates to improve their efforts for the betterment of the team.

“The lessons I learned from Hank are if you are going to work towards a certain goal, whether it was a team goal or individual, you have to work hard, and you have to work with good fundamentals,” said tight end Connor McIntee ’19. “He always pushed me to the max to make me the best football player I can be, which really helped me improve my game so that I could contribute to our team’s success.”

Hank made himself and the players around him better as athletes and individuals, leading his team with authority and resourcefulness. When the team struggled, he was the man who stepped up.

“Coaching Hank was a battle because Hank likes to battle on the field mentally, physically, and as a competitor who understands the game of football,” said Head Coach Marlon Blanton. “He did a lot of special things on the field that you just can’t see. He has a desire to lead. His desire to want to be a good football player has made him one of the best quarterbacks we’ve coached.”

Hank is a leader who will be remembered as a remarkable quarterback whose desire to play football and enhance his performance helped shape the skills and attitudes of his teammates.