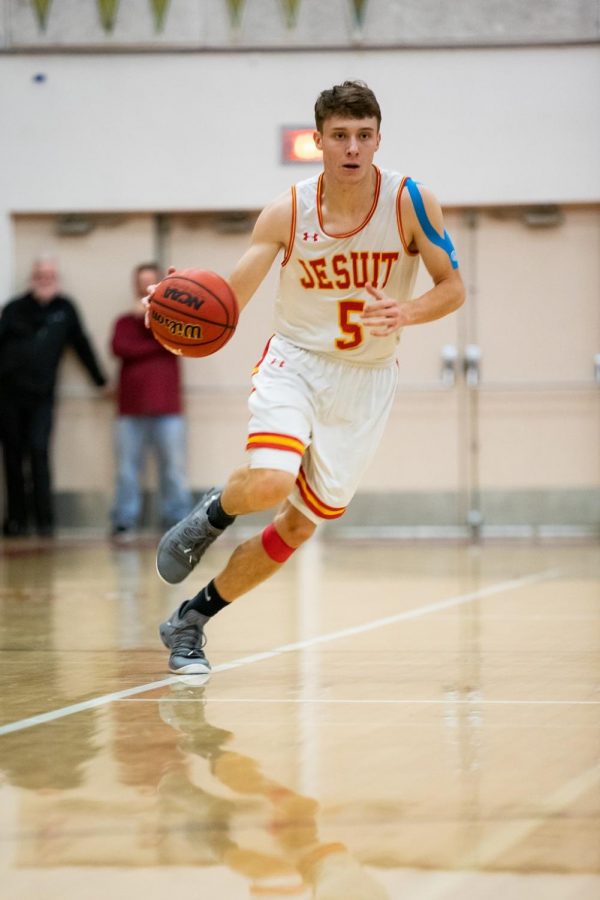 Jack Jones ’19 is one of the most involved student-athletes at Jesuit High School.

With a brother running track and cross country at Santa Clara University and another working as a manager for the University of Oregon basketball team, the Jones family has been involved with athletics, specifically basketball, for a long time. Whether it was playing against his brothers, just shooting alone, or starting at point guard for Jesuit’s varsity team, Jack recalls playing basketball for as long as he can remember.

“There isn’t a specific time, but growing up with two brothers who played and my dad who played, I was always playing,” Jack said. “I remember playing in preschool during recess and going home and shooting for hours. It’s never been work — it’s just what I love to do.”

Jack’s involvement extends off the court as well. Jack has served as the 2018-2019 Jesuit executive council president, leading the student council in planning and organizing events for the student body.

“Jack is a leader by example,” said Mr. Tim Kelly, Jesuit’s student activities director and varsity basketball head coach. “He works very hard and has high standards for himself and others, but he quietly goes about his business trying to reach those standards.”

Jack draws on his many inspirations to become a leader, but he always makes an effort to maintain his own originality.

“Kobe Bryant, Tracy Mcgrady, Allen Iverson, and Chauncey Billups are the main [inspirations] for sure,” Jack said. “I take stuff from each of them. But I’m not trying to be them; I’m trying to be better than them and be known as my own.”

Currently, Jack is still undecided as to where his future will take him. He is exploring both athletic and academic options, considering some local California schools as well as schools in Ohio and Oregon.

“Honestly, my playing career could be over,” Jack said. “I’ve had some small school offers and [Division I] interest, but I’m just not sure right now.”

It’s been a dream of Jack’s to play college ball. If not, then he’s decided to find a career that involves basketball. In Jack’s own words, “Do what you love, right?”