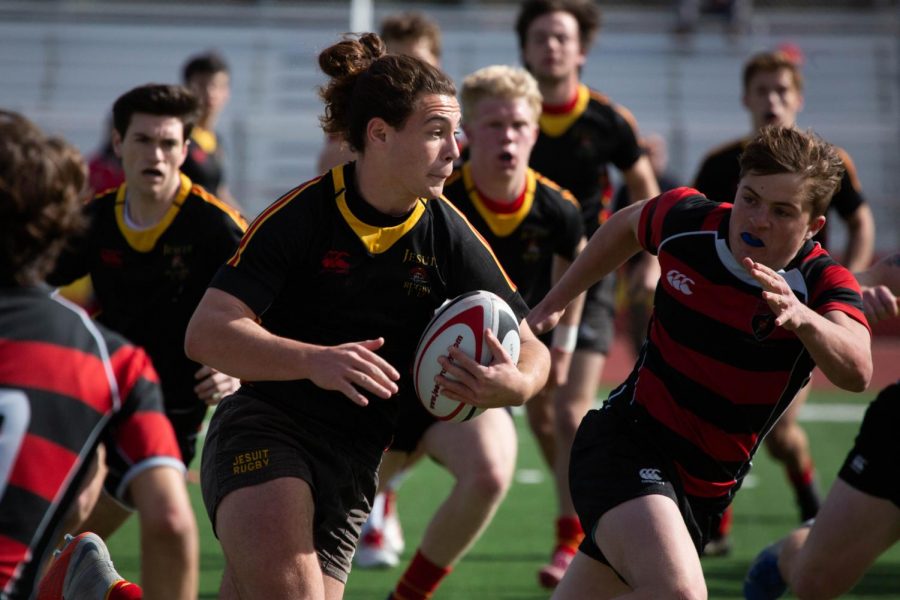 Rugby grabbed Max Schumacher’s ’19 attention at a young age, and although he played many other sports, there was something special about rugby that made the sport his favorite.

“I first started playing rugby in third grade, which is really young for the United States,” Max said. “I played other sports, like soccer and basketball, but rugby was always my favorite. Rugby is special to me because it requires every player on the field to perform all aspects of the game.”

However, Max is not just a rugby player. He has also excelled at Jesuit academically, played other sports like soccer, and participated in other co-curriculars. Max’s individual drive and work ethic guided him to his accomplishments, but he also admits that Jesuit has been a huge contributor to his commitment to UC Berkeley.

“My experience at Jesuit High School has shown what it’s like to be a good person, a man for others,” Max said. “The brotherhood provided a lot of support through the years. The Jesuit experience has definitely pushed me to be better as a student and an athlete. ”

Those who have been close to Max know that he is a fun and selfless guy. His rugby coach, Louis Stanfill ’03, believes that Max’s personality is a key factor in his sucess.

“Being a good person is the first important trait to being a good leader and, subsequently, a good rugby player,” Coach Stanfill said. “Selflessness is a quality often overlooked in today’s society and, accompanied by Max’s athletic ability, skill, work ethic, and other intangible characteristics, he has the ability to take his career beyond just UC Berkeley.”

Staying on top of school work, especially during the second semester, can be a challenge for many seniors at Jesuit; however, Max is aware of “senioritis” and believes it has not been the case with him.

“After committing to Cal, I’m excited to start a new chapter in my life,” Max said. “Although I’m committed, I don’t plan on taking it easy. I plan on maintaining grades and improving performance level before I leave for school.”

The work ethic that Max portrays daily has not gone unnoticed by those around him.

“Max’s desire to consistently improve is what has made him a standout,” Coach Stanfill said. “No matter the skill or his ability to perform it, Max works hard at practice, training each skill to the best of his ability.”

George Henry Miller ’19, a co-captain with Max on Jesuit’s rugby team, wishes Max the best of luck as he goes on to UC Berkeley.

“I hope rugby can take Max wherever he wants to go, whether it be playing overseas or for the national team,” George said. “We all know sport is temporary, so when he’s ready to give it up, he’ll have a great path lined up, starting with an education at Cal.”

As Max continues his rugby journey at UC Berkeley, he plans to bring along with him, the values of discipline and respect, principles he learned during his years at Jesuit.