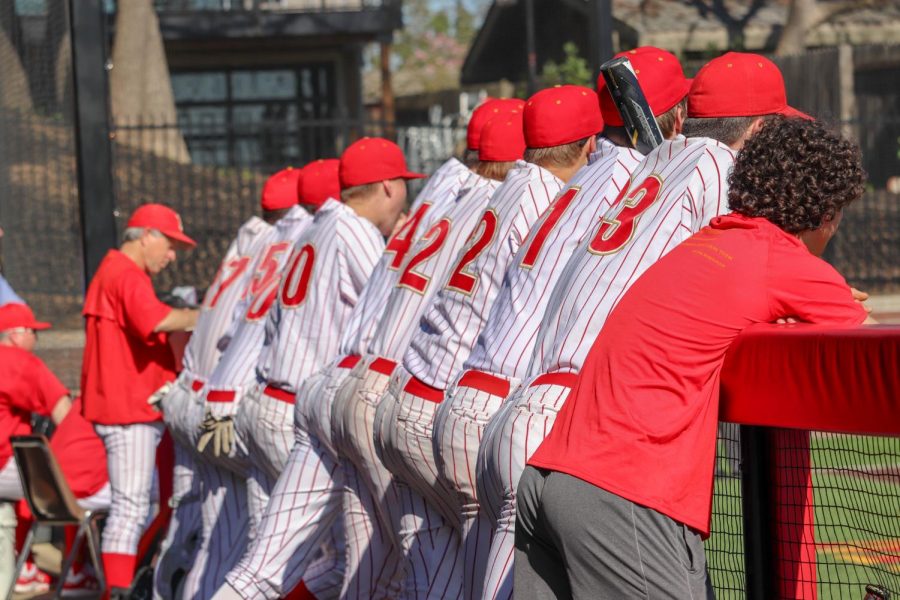 Seizing a chance to move up in the Delta League standings, the Jesuit High School varsity baseball team swept the Davis High School Blue Devils in a three-game series.

Jesuit, coming off a win against non-league opponent Berkeley High School, entered the series with a 4-2 Delta League record. Davis, looking to keep a four-game winning streak alive, had posted a phenomenal 8-1 Delta League record and occupied second place in the league, one rank above the third place Marauders.

Heading into the series, Davis was heavily favored with arguably the most dangerous lineup in the Delta League. A batting order that features senior outfielder Nate Vogt, who has started the season on an absolute tear, leading the league in home runs, runs batted in, and slugging percentage, and senior catcher Adam Dapkewicz, who leads the league in walks and steals and is top three in on-base percentage.

In game one, Oregon State University commit, Tonko Susac ’21 took the mound for the Marauders and pitched a scoreless first inning. In the bottom half of the inning, Jesuit also failed to score, stranding one runner.

The game would remain scoreless until the bottom of the second inning, when Davis’ starter, senior Zach Carrell, lost his command and walked two hitters before surrendering a double to second baseman Ben Siravo ’20, giving Jesuit a 2-0 lead. In the third inning, the Marauders got another run on an error that scored center fielder Will Asby ’19.

Meanwhile, as Jesuit’s offense was producing runs, Susac, was dominating on the mound. He shut out Davis’ offense through 4 ⅓ innings until senior third baseman Jonah Henrickson drove in two runs with a one-out double to put Davis within one run. Despite giving up a big hit, Susac finished the inning strong with back-to-back strikeouts. After the inning was over, Susac’s impressive outing would be done, striking out eight batters and only giving up two runs over five innings.

Late in the game, a Davis comeback was feasible with runners on first and second base in the seventh inning, but Jesuit’s closer, Carter Benbrook ’19, sealed the victory for the Marauders and earned the save.

After pulling off an underdog win at home in the first game of the series, the Marauders went on the road to take on Davis in game two. Jesuit faced stellar sophomore pitcher Luke Carrell, who came in sporting a 4-0 record with a 1.33 earned run average over five starts.

In the top half of the first inning, Carrell silenced Jesuit’s offense with three quick outs. In the bottom half of the inning, USC-bound Jesuit starter Andy Owen ’20 responded by getting three efficient outs of his own.

In the second inning, Jesuit’s bats found life with two singles to start the inning, followed by an RBI single on a line drive to left field by Siravo, putting the Marauders ahead 1-0.

After that early Jesuit score, the game became a pitcher’s duel between Owen and Carrell. Neither team managed to score a run until the fifth inning when Owen couldn’t locate the strike zone and walked the bases loaded before giving up another free base by nailing Dapkewicz with a pitch, forcing in a game-tying run.

In the sixth inning, Cade Cunningham ’19 entered the game in relief for Jesuit and pitched well, finishing the inning by striking out senior first baseman Ethan Ramos.

With the game tied up 1-1 in the seventh inning and Carrell still toeing the rubber for the Blue Devils, left fielder Charlie Hurley ’20 was hit by a pitch. Two hitters later, Cunningham singled and Hurley advanced to third base. Carrell was only partially able to escape the jam as Asby knocked in Hurley to score the go-ahead run for the Marauders on a groundout.  The Marauders held on to that one-run lead and defeated Davis 2-1.

Although Jesuit clinched a series win by defeating Davis in the first two games, the Marauders were still determined to win game three and sweep the series.

In the third inning, the Marauders finally scored as catcher Daniel Susac ’20 doubled on a line drive to center field, and shortstop Talon Krieger ’20 scored on a throwing error.

Catacutan entered to pitch for Davis in the fifth inning with runners on first and second base. However, Catacutan gave up two more runs.

With a 3-0 lead in the sixth inning, Benbrook took the mound for Jesuit and pitched two scoreless innings, completing the series sweep for the Marauders.

After defeating Davis in all three games, the Marauders are the second place team in the Delta League with a record of 7-2. The Blue Devils, after being swept, fall to third place with an 8-4 league record.

Jesuit’s dominance against Davis was largely due to their outstanding pitching, which limited the Blue Devils lineup to only three runs in the series. Their starters, Tonko Susac, Andy Owen, and Cade Pilchard, each pitched five innings and combined for 20 strikeouts. Despite the starters going deep into games and racking up strikeouts, the bullpen also did a great job as Carter Benbrook, Cade Cunningham, and Chris Baytosh didn’t give up any runs against Davis.

Game three starter Cade Pilchard was proud of how his team pitched against Davis.

“I think our pitchers dealt this week,” Cade said. “Everyone was able to command all their pitches. The team played with great confidence throughout the series, and picked each other up.”

Although the Marauders were dominant on the mound, Jesuit’s offense wasn’t as spectacular, never scoring more than three runs in any game of the series. Even with the offense struggling to produce runs, Jesuit’s head coach, Mr. Joe Potulny ’76, is optimistic that his team’s offense will improve.

“Progress offensively has been slow but showing signs of improvement,” said Coach Potulny. “Friday was by far their best performance of the year. Every individual must continue to trust the painstakingly slow process of fine-tuning their mental and mechanical approaches as the season unfolds. If they continue grinding each day, we will put together a lineup capable of competing in the playoffs.”

“Our pitching was great against Davis,” Ben said. “I think we only gave up three runs in the whole series. We need to start scoring some more runs to take some pressure off our pitchers, but I think we competed very well overall.”

After taking all three games against Davis, the Marauders are on a five-game win streak and have a good chance to make the playoffs. With a roster filled with talented players who are committed to play baseball in college, Jesuit is likely to have a great rest of the season and are surely a team to watch going forward.