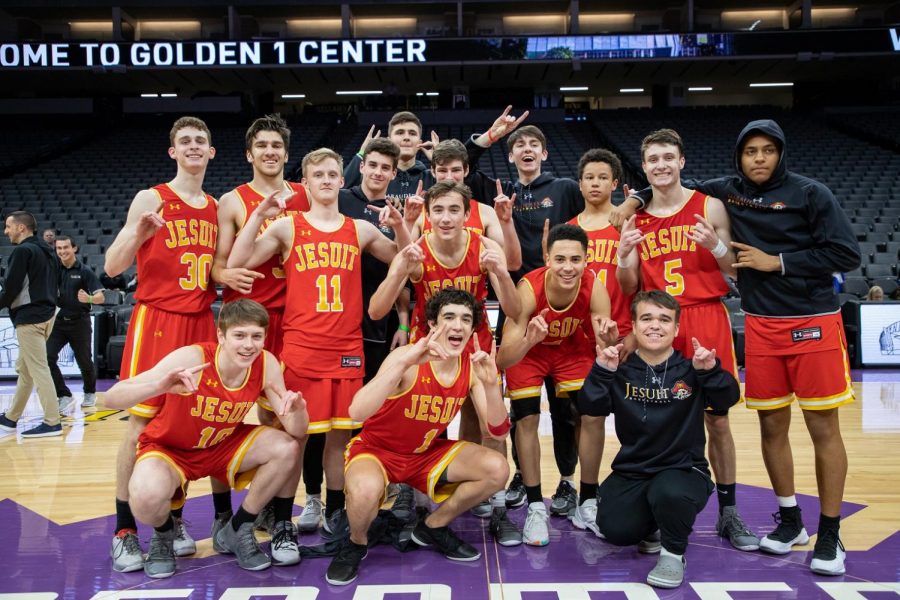 With the basketball regular season over and playoffs about to commence, Jesuit High School will take on Turlock High School this Wednesday, Feb. 13, at 7 p.m. in round one of the Sac-Joaquin Section playoffs.

The Marauders are the No. 4 seed and finished the season as Delta League Champions with a 10-2 record. The Turlock Bulldogs, who had a 7-3 record and finished second in the Central California Athletic League, are the No. 13 seed.

The favored Marauders excel at spacing the floor and finding open shooters on the perimeter. Jesuit is tough to defend as their shooters demand enough respect that defenders are forced to guard most of Jesuit’s players from well beyond the arc.

One of Jesuit’s biggest threats from downtown is guard Jack Jones ’19, who nailed a school-record eight three-pointers against Pleasant Grove High School.

Even though Jesuit is primarily known as a shooting team, they’re also excellent at crashing the boards. The team’s non-traditional 6’4” center, Sam Daly ’19, grabbed 24 rebounds in a game versus Elk Grove High School.

Unlike the team-oriented style of the Marauders, the Bulldogs run their offense through two players: junior forward Cole Carrigg and senior guard Cameran Sherwood. They average a combined 31 points per game, almost half the points that Turlock averages as a team. If the Marauders can limit the production of these players, they will shut down Turlock’s offense altogether.

Even though the Marauders are predicted to win, Jesuit point guard Isa Silva ’21 doesn’t want his teammates to become overconfident just because they’re seeded higher than the Bulldogs.

“Each game is meaningful, and in playoffs, the intensity is a level higher,” Isa said. “Everyone is fighting to keep their championship goals alive, and the seeding means nothing.”

With the winner advancing to the second round, and the loser going home, Jesuit guard Chris Holley ’21 believes it’s crucial that his team plays unselfishly and compete for rebounds.

“We will be effective if we move the ball well and box out for rebounds,” Chris said.

“Our team will have to defend at a high level,” Coach Hilton said. “That includes rebounding as a team, including guards, and also improving our transition defense.”

If Jesuit defeats Turlock, they will advance to the second round and play on Friday, Feb. 15 against the winner of the Oak Ridge-Kennedy game. A win in the second round would potentially lead the Marauders to play Sheldon High School, the number one seed, on Wednesday, Feb. 20.

A Sheldon-Jesuit game would be played at Jesuit due to Sheldon’s infraction on league rules. Sheldon were forced to forfeit four wins after the Delta league discovered that a Sheldon player played two weekend adult league games, according to the Sacramento Bee. However, Sheldon was still ranked the No. 1 seed based on their strength of schedule and performance against nationally ranked teams.

Tonight, Jesuit’s season is on the line as they battle at home against Turlock at 7 p.m. In a game this crucial, the Galley Crew will need Jesuit’s student section to be as hyped as possible in order to energize the players on the floor.

Come out and support the Marauders as they fight to stay alive in the playoffs and advance to the second round.