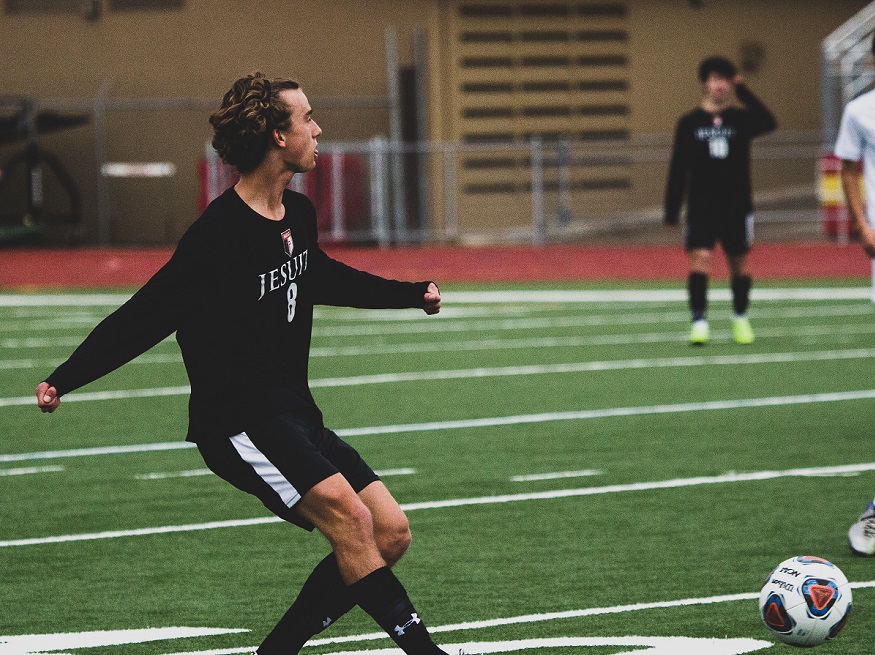 Jesuit got off to a nice start early in the first half with a goal from midfielder Matt Kahn ’20. Davis quickly responded with a goal in the same half to tie it up 1-1, which was the final score of the game.

It was a disappointing result for the two teams looking to prove themselves against the other. Playing against Davis builds up a special kind of passion because the level of competitiveness is extremely high.

“Playing Davis is always a special rivalry,” said goalkeeper Matthias Milton ’19. “It is more physical and more emotional than any other league game because there are two things on the line: points and pride.”

Despite the passion that the game provokes within the athletes and spectators, Jesuit was able to keep calm and collected throughout the game.

“One of the most important things the team did well was keeping our heads in the game despite the game being so intense,” said striker Cole Barrett ’20. “We never once got on a teammate for making a mistake; in fact, my teammates and I looked to give words of encouragement to anyone who made a mistake.”

Although the team failed to obtain a win, there were still some good things to highlight on Jesuit’s side. Starting goalkeeper Frankie Turnbull ’19 had a stunning individual performance.

“Frankie Turnbull had a fantastic game,” Cole said. “He played the full game and made tons of fantastic saves, including a one-versus-one stop in the final minutes of the game to keep us tied.”

The Marauders still have half of a season in front of them. So far, the team is 4-0-2 in league. In order to ensure more wins in games in the future, the team has areas to improve on.

“The Davis game was a good game,” said defender Sean Burke ’20. “It was difficult, but I think if we work better on playing as a team — and we are already working on it and improving everyday in training — it will help us win the tough games in the rest of the season.”

The varsity soccer team is strong this year, and the team’s skill will be tested this Friday against Cosumnes Oaks High School in Elk Grove at 3:00 p.m. Come out and support our Marauders!