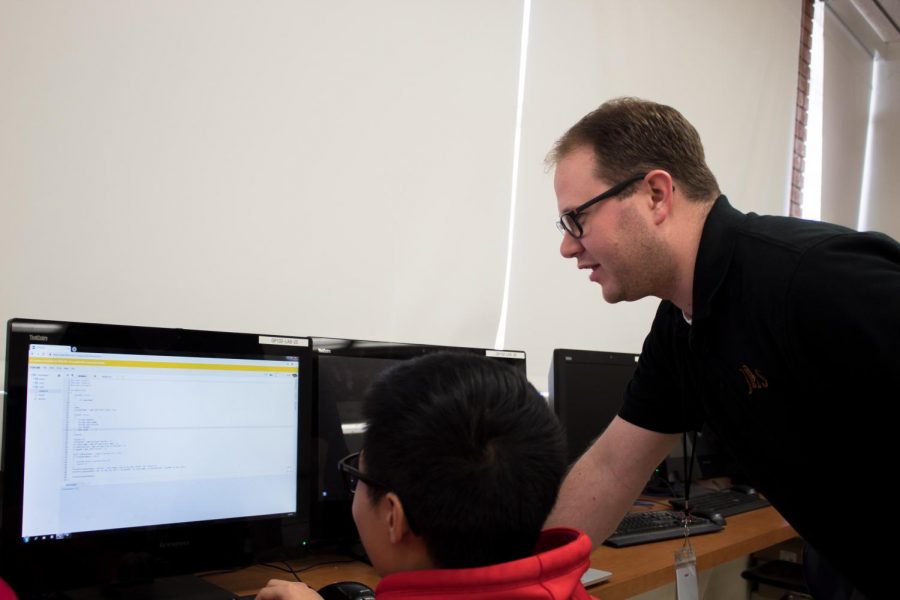 After graduating from Jesuit in 2004, Mr. Strawn attended the University of San Diego to pursue a degree in English. He eventually went on to receive his master’s in English from California State University, Sacramento.

After 10 years of working at St. Francis, Mr. Strawn decided to come to Jesuit to teach computer science. Among many reasons, his desire to return to the brotherhood of Jesuit High School and the Ignatian ideology, especially the emphasis placed on spiritual growth.

Even though he’s only worked at Jesuit for a couple of months, Mr. Strawn has already made a great impact on his students.

“He’s an amazing teacher,” said Colin Brannan ’19. “I never thought that I’d ever learn how to code, and, only one quarter in, I could solve trigonometry in Java.”

For Mr. Strawn, another benefit of returning to Jesuit is working alongside his close friend from high school, English Teacher & English Department Chair Mr. Colin O’Connor ’04.

“I am thrilled that he has joined the community,” said Mr. O’Connor. “He is going to do excellent things with the computer science program. With things that he’s passionate about, others cannot help but get swept up [by his passion]. It’s contagious.”

In addition to computer science and English, Mr. Strawn also has a passion for music, especially that of John Mayer, whom he has seen 25 times. He sees life as being a “musical autobiography,” with memories and experiences all wrapped into music.

Holding high regard for his high school and college experience, Mr. Strawn believes that the adolescent years are incredibly valuable.

“It is important to see that you shouldn’t miss an opportunity when you’re here,” said Mr. Strawn. “Part of it is hindsight, but another part is appreciating what you have in the moment. Having gratitude for what you have is crucial.”

Mr. Strawn has already shown that he will have a great impact on our Jesuit community and will be a driving force behind our growing computer science program.