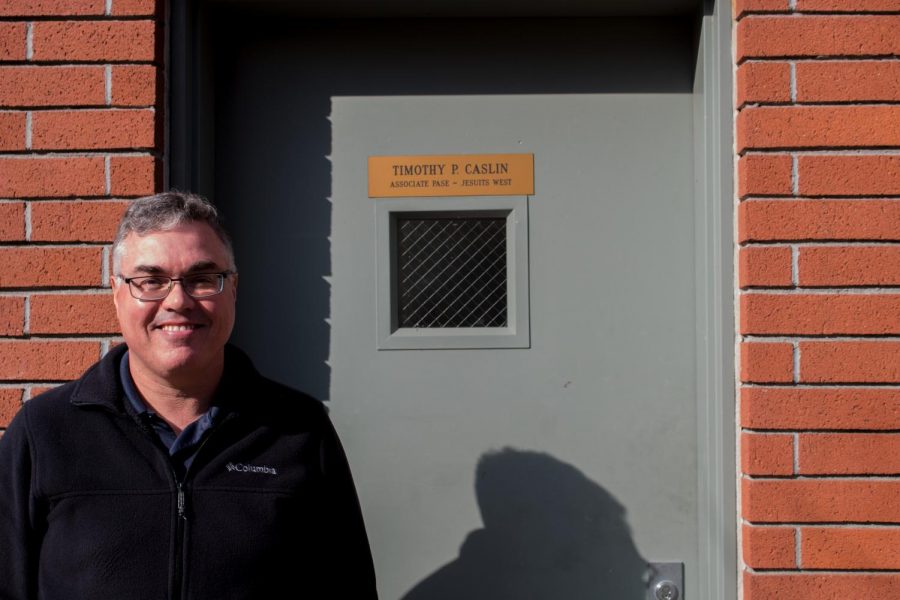 Take the sidewalk on the east side of the campus, overlooking the baseball fields, and once you get to Goupil Hall, you’ll find a door on the side of the building. The door opens into the office for someone who works at Jesuit High School but not for Jesuit: Mr. Tim Caslin.

Mr. Caslin had been working for Jesuit since 2000, first as a theology teacher, then also as an assistant principal. However, just a few months ago, Mr. Caslin started working as the Associate Provincial Assistant for Secondary and Pre-Secondary Education (PASE) in the Jesuits’ West Province. In simpler terms, Mr. Caslin is the intermediary between the schools and provincial of the province.

“Our office helps those schools stay in touch with the province,” said Mr. Caslin. “It does formation things for those schools, for their faculties and board members and administrations and also runs a process that’s called sponsorship and endorsement that helps the schools reflect on their Jesuit identity.”

So far, Mr. Caslin enjoys working as the Associate PASE, as he continues the work he’s been doing his entire life.

“I’ve literally spent my entire adult life working in Jesuit education,” said Mr. Caslin. “I believe in what these schools do in their mission. This job is laser-focused on the mission of Jesuit schools, and it’s an opportunity to help the schools stay focused on the core mission.”

The educational mission of the Jesuits is something deep and complex, but Mr. Caslin has a clear understanding of it.

“I think the core mission of Jesuit education is to help young people see the presence, the love, the movement of God in their lives, and, in gratitude for that, to give their lives back to God by using their gifts and their talents and their time and their resources to help God do His work in the world,” said Mr. Caslin. “We phrase that as ‘Men for Others,’ that God’s work in the world is a work of love, a work of care and compassion and mercy.”

Fr. John McGarry, S.J., the current president and former principal of Jesuit, originally hired Mr. Caslin as a theology teacher at Jesuit. He’s known Mr. Caslin for years, and truly believes that he’ll do a great job as Associate PASE.

“Mr. Caslin is the perfect choice to serve the provincial and the schools of the Jesuits’ West Province as the Associate PASE,” Fr. McGarry, S.J. “[He] is exactly what we need for Jesuit schools—leaders who are not caught up in the trappings of leadership, but people who want to lead for the good the mission of Jesuit education and the formation of our students.”

Jesuit misses Mr. Caslin in his role as an assistant principal, but we are grateful that he’s still close by, both in office and in mission.