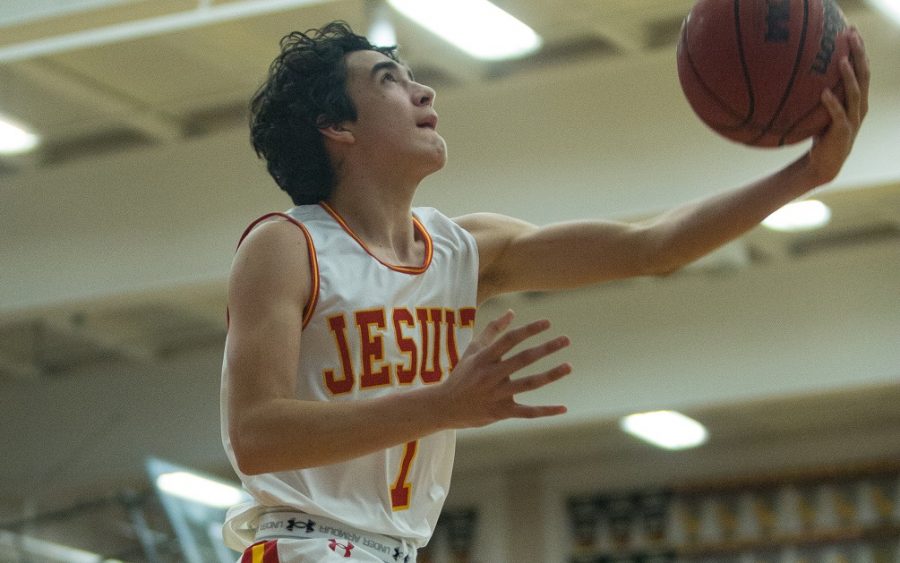 With the season about to commence, expectations are running high for Jesuit High School’s varsity basketball team.

Last season, Jesuit finished with a 22-8 record and made it to the California Interscholastic Federation (CIF) State Playoffs. As the Marauders look to have another successful season, they will be competing with a new head coach, Student Activities Director Mr. Tim Kelly, and 10 new players on the 15-man squad.

In addition to having a new coach, Jesuit has an almost completely different team, with seven seniors now gone and a large number of sophomores on the roster. Guard Jack Jones ’19 is confident that his team can win, despite their lack of experience at the varsity level.

“We are young, and we are small,” said Jack. “With five sophomores, only three seniors, and no one above 6’4”, we have to mature quickly. We need to play great individual defense and play scrappy. We have a packed schedule with great opponents, but we will stand our ground, play our game, and do whatever we can to win.”

One of those sophomores, point guard Isa Silva ’21, is focused on competing rather than on the youthfulness of his team.

“This season, we are focusing on the game ahead of us, not too worried about anything except the next game on the schedule,” said Isa. “If we collectively channel our team’s focus on each game like that, I believe we will have a very successful season.”

Even with the new changes, fans should expect a great season as Jesuit has two players ranked in the top 15 of their class: sophomores No. 3 Isa Silva and No. 14 Brandon Rutherford.As of right now, the Marauders are still in the non-league season with a 2-1 record after a successful tournament at the WildWest Shootout in Nevada. As Jesuit continues to prepare for league play, they will compete in the Father Barry Classic at home. The Marauders will open the tournament against St Patrick – St Vincent High School, December 6th, at 6:45 p.m.