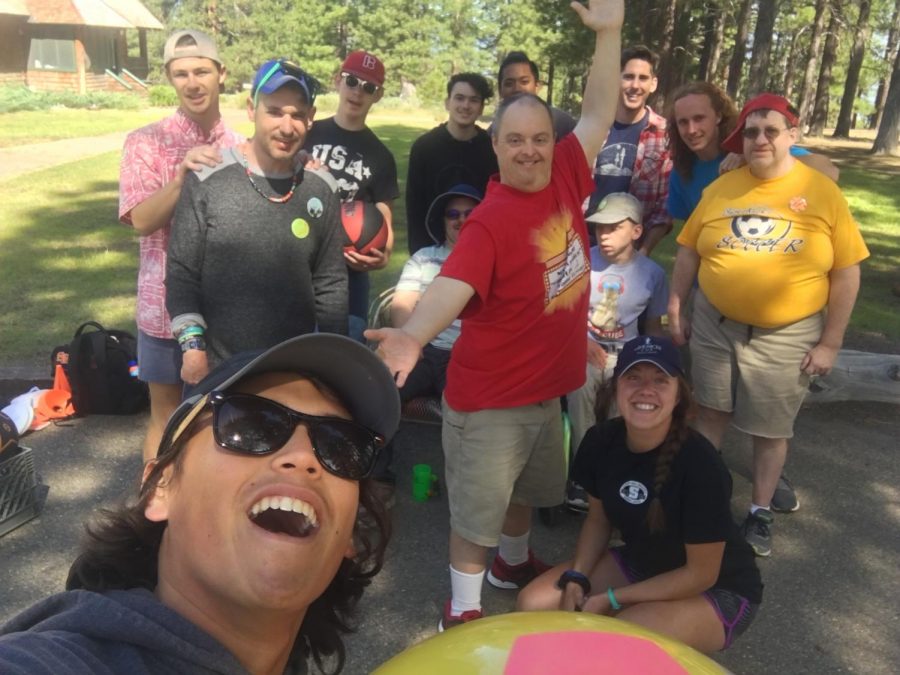 Camden Rothleder taking a selfie with his Camp ReCreation cabin group after playing kickball and basketball.

Before my immersion, I viewed my scheduled week at Camp ReCreation as a way to finish up my Christian Service requirements; however, the week turned out to be a transformative experience that redefined how I saw the disabled community.

Since 1983, Camp ReCreation has served the developmentally disabled population with a one week summer camp.

Held in Eagle Lake, near Susanville, California, the camp is secluded from the outside world. This solitude allows both campers and counselors to fully immerse themselves in the experiences that make Camp Rec unique.

I was partnered with Stephan Gall, an avid Golden State Warriors and Bruno Mars fanatic.

As Stephan’s counselor, I accompanied him through the week’s carnival, beach days, sports, arts and crafts, dance, and talent show. Aside from making sure he stayed clean, ate, and took his medicine, my primary goal was to give Stephan the best week of his year.

Camp Rec gave my immersion group some insight into the injustices faced by the developmentally disabled population. We learned that many of the campers live a life facing ridicule and misunderstanding. The lives they live outside of Eagle Lake can often leave them forgotten in the care-home systems.

Camp Rec may just be a service trip, but for Stephan, it is the one vacation he gets to do anything he wants. Stephan, like all the campers, looks forward to a week where his happiness is placed as a priority.

My week of being fully immersed with campers at Camp Rec transformed me.

I found these campers to be some of the most joyful individuals I have ever met. I was inspired by their confidence in being unapologetically themselves.

Like so many of my Jesuit brothers before me, I went into Camp Rec thinking I was going to change a camper’s life, but in turn, I changed; I got a glimpse at a world of complete joy.