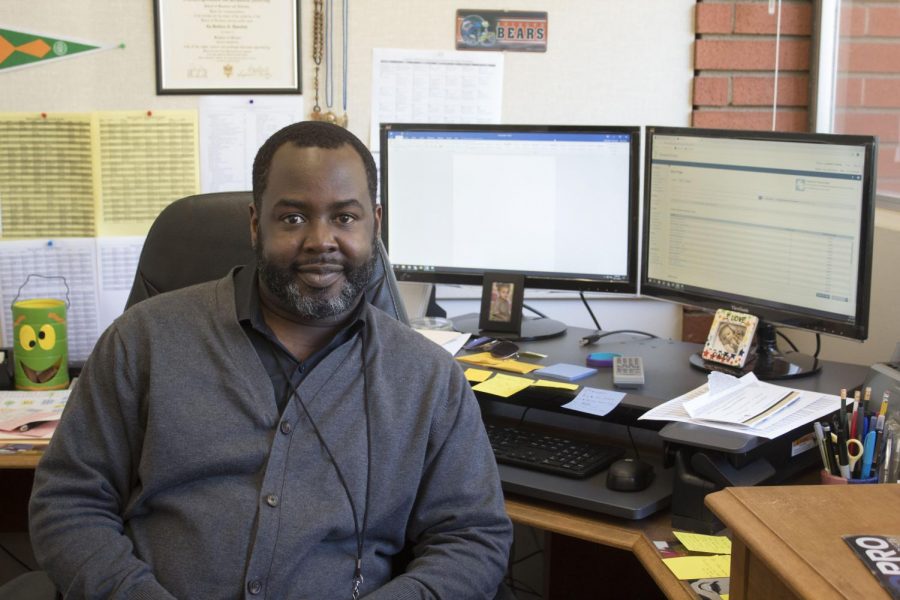 At the Dean’s Office at Jesuit High School, Mr. LaRoddric Theodule works with a sense of optimism as he navigates his first year as the new Dean of Students.

The new face of the Dean’s Office brings many years of teaching and coaching experience, even though it had not been his initial professional endeavor. Before becoming a teacher in the fall of 2002, he interned in New York City in the world of finance.

When the 9/11 tragedy occurred, Theodule felt compelled to dedicate his life toward ensuring such an event would not occur again. This led him to consider his future career in the education field where he could affect the next generation of youth.

“I wanted to work with kids where I have an opportunity to hopefully impact them in a way that never leads to this tragedy again,” said Dean Theodule.

Dean Theodule went on to be a teacher at his high school alma mater, Bellarmine High School, a Jesuit high school in the Bay Area. When he was a student at Bellarmine, he believed the positive and supportive relationship he had with his Dean shaped him into the Dean he aspires to be.

“When I went to Bellarmine, I had a really good relationship with my Dean,” said Dean Theodule. “The Dean’s Office should not be some place where it is always a negative experience.”

As a product of and contributor to Jesuit high schools, Dean Theodule understands the history of Jesuit education, making him a great fit for Jesuit’s new dean. This experience, combined with his desire to support the student body, had caught the interest of his faculty members.

“What stuck out to me about Mr. Theodule was his incredible balance of holding students accountable and caring for them deeply and guiding them through their journey,” said Principal Michael Wood ’99.

Dean Theodule brings in a new perspective to Jesuit. His years of experience may bring about different ideas, but this can help promote a great environment for students and faculty alike.

“I look forward to working with Mr. Theodule because he has a set of ‘new eyes,’” said Assistant to the Dean of Students Mrs. Mary Harrison. “He brings new ideas and his own experiences to the table, and that has the potential to affect everyone on campus in a significant and positive way.”

Under the new leadership of Dean Theodule, Jesuit students can continue to better themselves both inside and outside the classroom. He looks to forward to bringing his experience to the school.