Who is the elephant man? 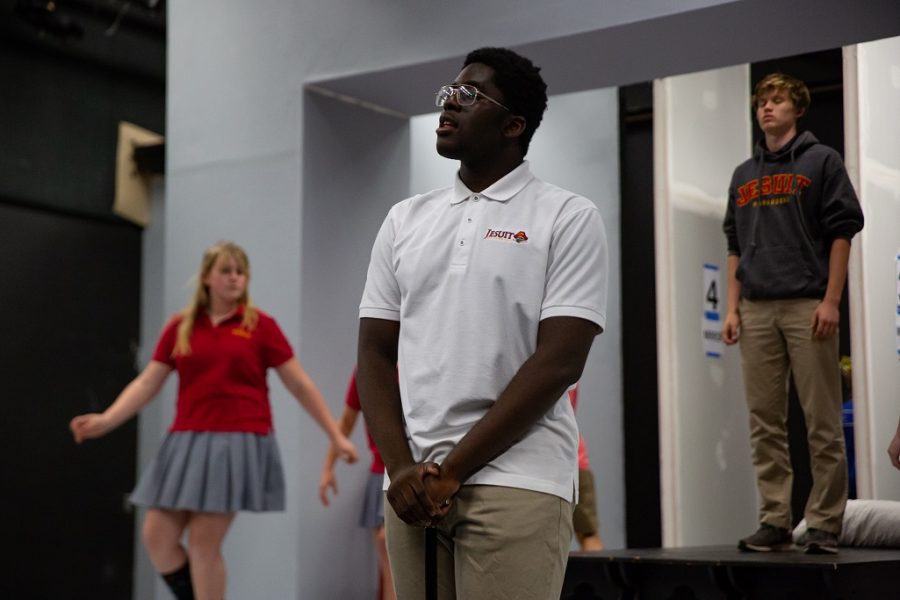 Obinna Okoye '19 during rehearsals for "The Elephant Man."

Yesterday (Nov. 1) Jesuit High School’s adaptation of the play “The Elephant Man” premiered in our very own Black Box Theatre.

The play deviates from other performances Jesuit has produced in the past. Jesuit Drama Artistic Director Ed Trafton ’84 hopes “The Elephant Man” will be both meaningful and entertaining, a rare combination for most high school productions.

“I chose this play because I’m growing increasingly weary of people who want to put theater experiences in only one of two separate categories: shows that are about something, that have a message, or shows that are entertaining,” said Mr. Trafton. “Shows can be both. Shows can be both about something and entertaining. ‘The Elephant Man’ is such a play.”

“The Elephant Man” follows the actions of a deformed man by the name of John Merrick. Suiting up for such a character takes grit, but the talented Obinna Okoye ’19 has taken up the challenge.

“I really have to focus on bringing this character to life on stage,” said Obinna. “The play is obviously about [John Merrick], so I have to be at the top of my game. In order to do this, I have to research everything about him: how he moved, how he talked, what he did, and the impact his personality had on others.”

Acting is not a new endeavor for Obinna. “The Elephant Man” is his third production in Jesuit Drama, and he has done plenty of research on the play, specifically on his character, John Merrick.

“I am happy to say that this is my third show,” said Obinna. “Right now, the rest of the cast and I have been doing a lot of research. We were also given a book, called ‘Measured by Soul,’ that goes through the life of Merrick in-depth and talks about his impact after his death.”

Playing such a character is no easy task, but Obinna has exceeded all expectations. Cast members like Gabe Rogers ’19 have high hopes for Obinna’s rendition.

“Obinna plays John Merrick very well,” said Gabe. “His character requires a lot of subtlety to play. Merrick is a genuinely kind and polite person. Obinna has to play him [as someone who is] respectful and reserved and yet also full of life.”

The script boasts a touching message that Jesuit hopes to manifest in its performances.

“The play itself has fantastic writing, very memorable characters, and an important—and timeless—message,” said Mr. Trafton. “It’s a chance to meet a fictionalized version of a real-life person who will touch your heart:  John Merrick—the Elephant Man—is someone that everyone should know, if they don’t [know] him already.”

With a fantastic plot and an incredible cast, “The Elephant Man” is expected to grab the eyes and hearts of those who watch the production. Tickets are on sale now at Jesuit’s Box Office and online for $10 for students and $15 for general admission.