Complexity at the southern border 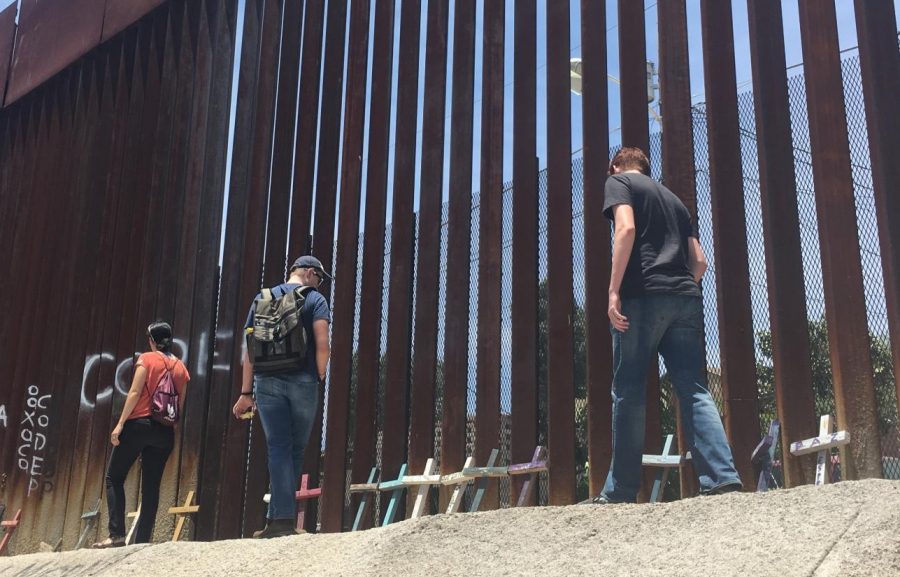 Participants in the Kino Border Initiative immersion look at memorials along the Mexican side of the border fence in Nogales, Sonora.

A massive rusted steel fence, anywhere from 18 to 30 feet high, undulates in the hills of the Patagonia Mountain range, dividing in two what was once the united city of Ambos Nogales, Arizona and Sonora.

Though the gates in the wall are opened to the flow of commerce from both countries, people can not pass freely; instead, Nogales, Sonora serves as a staging ground for recently deported migrants trying to determine their next steps.

In trying to aid these migrants, The Kino Border Initiative (KBI) was founded. In addition to providing humanitarian aid, the KBI also exists to educate visitors on the complicated realities of the immigration system, and to advocate for immigration policies in both the U.S. and Mexico that promote justice.

It was within the confines of KBI’s small soup kitchen that eight Jesuit High School students and two faculty members accompanied men, women, and children who shared their stories of movement across the border.

In a shelter, a Honduran woman recounted the harrowing, tumultuous, and courageous journey she and her two children made fleeing an abusive relationship and violent gangs.

As she spoke, her youngest son Jesus, an impatient little boy, squirmed around with an innocent smile, making all of us chuckle at his playfulness.

I once was an impatient little boy like Jesus, unaware of the complex environment around me, wanting nothing more than attention, love, and care.

Coming to know migrants as people just like us was the best part of the immersion. The images seen in the news rarely give the names of migrants; instead, they simply become a statistic, not a person. We all met those who reminded us of ourselves, our own family, our friends.

We met individuals who were brought undocumented to the United States as children, now deported as adults. Our group witnessed their shock and disillusionment. Many lived, worked, and had families in the United States. Now they must endure living in a country they never knew, far from the  ones they love.

At its core, KBI invites participants to see migrants as fully human and to complicate preconceptions. KBI amplifies the stories of migrants offering participants an opportunity to accompany the marginalized and to advocate for better immigration policies.