A flyhalf and his brothers 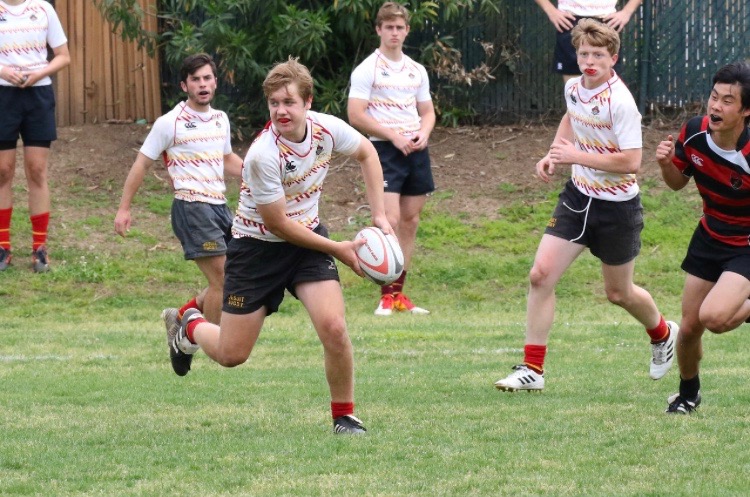 Jack Marchant ’19 wanted to play rugby because his older brother played before him.  At the start of the season, he went out to one of their practices, and he loved it. Now, in his senior year, Jack loves the game, but he loves his rugby brothers even more.

“Rugby is a brother sport where you learn to trust your brothers and believe in them,” said Jack.

Jack plays flyhalf for the rugby team. Like the quarterback of rugby, he makes sure the players are in position and calls the plays.

“It is definitely a very hard position,” said Jack. “It doesn’t have to be for the biggest or fastest player on the team. It has to be someone who has good sight and who is smart with the ball.”

At Nationals in Kansas City, the Jesuit High School rugby team played Gonzaga in the semi-finals and ended up in third place.

“Gonzaga had a lot of big guys, so their whole strategy as a rugby team was to run hard and score,” said Jack. “[This] is different from Jesuit’s strategy, which is to outsmart teams. So Gonzaga was able to pound us continuously and score more tries against us.”

Even though they lost, all wasn’t lost. They had the chance to play against a New Zealand team.

“It is a pretty cool thing to do,” said Jack. “That’s what makes Jesuit rugby a cool thing to do because you know that the New Zealand teams do the Haka and that is pretty intimidating to watch and they are screaming at you in a different language. It is really cool to experience their culture.”

Jack devotes his time and love to rugby, and he has open arms to students who are considering the sport.

“I would highly recommend it and highly encourage new players to join because rugby creates a brotherhood,” said Jack. “You can trust and bond with a bunch of guys you turn to and it creates a thing to do instead of sit at home and play video games after school. Rugby is my life and I love it.”