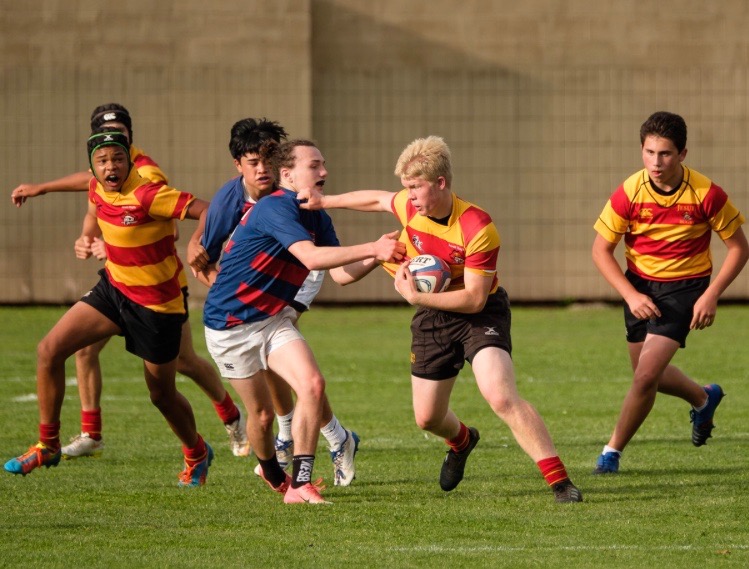 Last rugby season, the Jesuit High School Marauders faced the Peninsula Razorhawks for the California State title. The Razorhawks outweighed Jesuit’s junior varsity team by at least 50 pounds, seeming bigger and more powerful. At the start of the game, the Razorhawks were winning five to zero, and most assumed Jesuit would be annihilated.

“Even though the players on the Hawk’s team looked like they were in college, we were all very confident in our abilities,” said eight man Soren Peterson ’20. “I’ve been with these kids for a year or so. We all have good team chemistry.”

Around the first half, it became clear that the Marauders were capable of holding their own against the Razorhawks. Eventually, skill overcame body size, and the Jesuit Marauders won the California State title by a landslide 44-26.

An exhausted Soren dropped to the ground at the end of the game, but, seconds later, he and his team were holding the trophy proudly, reflecting on how they got to this point.

“We had a lot of drills and training to prepare us for the game,” said Soren. “Size doesn’t matter if you stay low. To prepare us, our coach made us do loads of running. I remember one time when he left his phone on the grass, one kid stepped on it, and it cracked. Coach had us run laps for thirty minutes.”

Experiences like this brought the team together and helped increase their trust and respect for each other. The Jesuit team thrives on experience, determination, skill, and most of all, teamwork, such as good communication, mutual support, and positive behavior.

“Our team is much more competitive than other rugby clubs.  We what we want to do, when we want do it,” said Soren. “This was an amazing season. I feel like us as a team improved in every category.  I feel like we became faster and more aware . . . My goal for next season is to win the national championship.”