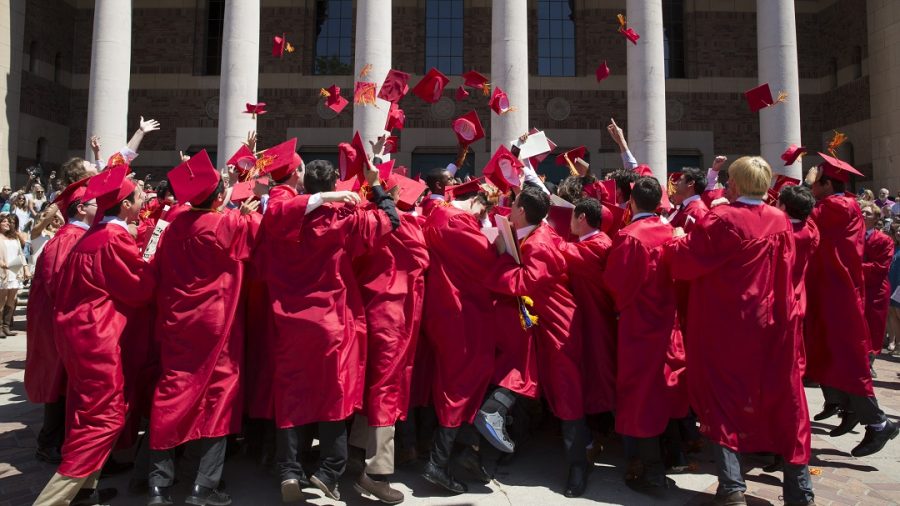 Every graduation is a unique gathering of students, family, and guests.

“A lot of work goes into graduation,” said Executive Assistant to the Principal Mrs. Colleen Arrigo. “Whether it’s at the gym or at Memorial, we work hard to make sure it’s a special experience for every student and their family.”

Many have thought that graduation has always been at the Sacramento Memorial Auditorium, but that’s not true. As recently as 2006, graduation was traditionally held in our very own Fr. Barry Gymnasium.

Before the switch, the gym versus the Auditorium debate was a controversial topic amongst the students and the community at large. A strong segment of the community pushed for the gym.

In the article “Symbolism of the gymnasium outweighs comfort,” published in The Plank in 1998, Michael Ambrozewicz ’99 writes,“[Those who would move graduation] fail to see this great symbolic meaning. I would contend that such people don’t believe that Jesuit is a special place and fail to understand the significance of our second-home.”

The pro-gym contingent valued the sentimental tradition of graduating at the place where students spent the last four years far more than any benefits of comfort the Auditorium could offer.

“Memorial Auditorium is lovely and traditional for Sacramento, but I don’t necessarily feel like it’s a part of our community or a part of our tradition,” said English Teacher Ms. Tristine Zanotto. “If it was more comfortable in the gym — refurbished and nicer — then move it home.”

The memories of dances, home games, masses, and other events were said to be too important to ignore. The only recognized downside was the lack of an air-conditioning system and space in the main gym, a problem that is still relevant today.

“There’s something about graduating in the gym that is particularly special,” said Principal Mr. Michael Wood. “Graduating where it all began with your fellow Marauders is something that can’t be ignored because it offers a sentimental value to an already special graduation.”

The pro-Memorial Auditorium contingent argued that changing the location just made more sense. While it was acknowledged that change can be scary and that the tradition of the gym is special, the benefits of the switch outweighed the sacrifice.

“The Memorial definitely offers benefits in that it allows for more seating, a cooler environment, and it better suits ours needs for graduation,” said Mr. Wood. “We’ve been going to Memorial for so long now so I feel as though it has become a new tradition.”

Before 2006, Jesuit High School students were rooted in the tradition of graduating in the gym and were generally pushing towards keeping the tradition alive. However, students of today may have a different opinion. We haven’t experienced either the gym or the auditorium yet, but students have begun forming opinions.

“Graduation would definitely be better at the (Sacramento Memorial) Auditorium,” said David Ryan ’18. “I saw my brother graduate there and it feels like our tradition now. Plus, there’s air-conditioning and way more seats.”

Others, however, value graduating in the gym.

“I think that graduation would be better if it were held in the gym,” said David Vincent ’18. “More people live near Jesuit, the parking is better than it is downtown, and it’s [important] we graduate where it all began.”

The location of where we graduate obviously affects us, but what really makes our graduation special is the brotherhood associated with it.

“When I graduated we had Baccalaureate and Graduation in the gym, and it was great,” said Jesuit Drama Director and English teacher Mr. Ed Trafton ’84. “But we were a much smaller school back then and while it was nice to be with each other during those last moments here at ‘home,’ Memorial is great, too, because it’s really about us being together; that’s what’s more important. Ultimately, it’s not about the place: it’s about us.”

“The location doesn’t matter,” said Director of Campus Ministry Mr. Paul LeBoeuf. “What matters is that you all are one going out and doing the same job [together].”

Graduation is about the people we worked with, the education we gained, and the memories we created. Jesuit is not simply a place; it’s more important. Jesuit is a group of Marauders who share the same ideals and love for one another.

“The brotherhood, sisterhood, personhood of our community starts directly with us, not from the outside or from someone else,” said Trafton. “In order for us to find it, we have to create it. Jesuit will be good if we at Jesuit are good.”

No matter the location, what’s clear is that the only tradition that needs to stay is the brotherhood. What’s most important about where we walk is that we walk together.