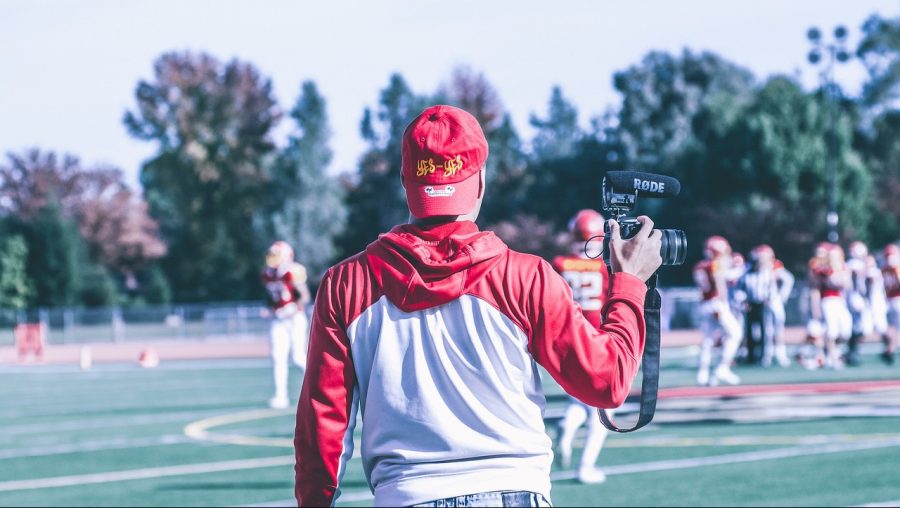 Kobee’s brand Yes-Yes Productions has taken Jesuit and the rest of the Sacramento community by storm. The media editor has done work for motivational speakers like Isaac Serwanga ’08, high school football stars like Isaah Crocker ’18 and Kahlef Hailassie ’18 (both University of Oregon commits), and has even filmed Pro Golfers Phil Mickelson and Brendan Steele.

However, many do not know that Kobee’s success started from an athletic injury, sideling him for the football and basketball seasons during his senior year.

“Yes-Yes Productions officially started at the end of my Junior year when I found out that I wouldn’t be able to play basketball and football my Senior year due to a hip issue,” said Kobee. “This issue has also been a blessing in disguise because I got to pursue filming which was also another passion of mine since seventh grade.”

Although Kobee was out for his Senior year in sports, he remained an integral part of the football team, filming videos on the sidelines of each game. Head Varsity Football Coach Marlon Blanton noticed Kobee’s hard work and was very proud to see him pursue another passion of his.

“I have always been a big fan of Kobee,” said Coach Blanton. “As his teacher and coach, he has been such a hard worker both on and off the field. I am so glad I get to see his first steps into his new passion of filmmaking, and I am proud to continue seeing him grow as a young man despite the challenges he faced with his hip injury.”

Although Yes-Yes Productions is known primarily for sports mixtapes and videos, Kobee has dove in into new types of film in order to build his brand.

“I usually film a lot of sports videos and create mixtapes and hype videos for people, but as time went on, I have also ventured out and started filming various other things as well, such as parties, promotional videos, and I recently did a motivational speaking video for Isaac Serwanga, Jesuit alum, and author of How to Network In College,” said Kobee.

Kobee’s outstanding work ethic as well as his expertise captured the eyes of motivational speaker and consultant Isaac Serwanga ’08, landing him an opportunity to film Isaac at this year’s Alumni Career Day, an opportunity for Juniors to learn of various possible career fields.

“I first learned of Kobee’s great work from his time with the varsity football team,” said Isaac. “His videos were energetic and great recaps for each game. Each production was better than the last. I was invited back to campus to speak at the Jesuit Alumni Career Day and I wanted to work with Kobee to illustrate my message and the power of networking! As a speaker, I rely on great video content. Kobee provided that and more.”

Kobee has big plans for the future, hoping to take his passion to another level.

“I plan on going to Chapman University and getting into the film program and doing acting and filmmaking,” said Kobee.

Yes-Yes Productions’ impact on Jesuit’s community has been impressive, and Kobee’s talent and hard work continue to capture the attention of all those who have seen his exciting videos.