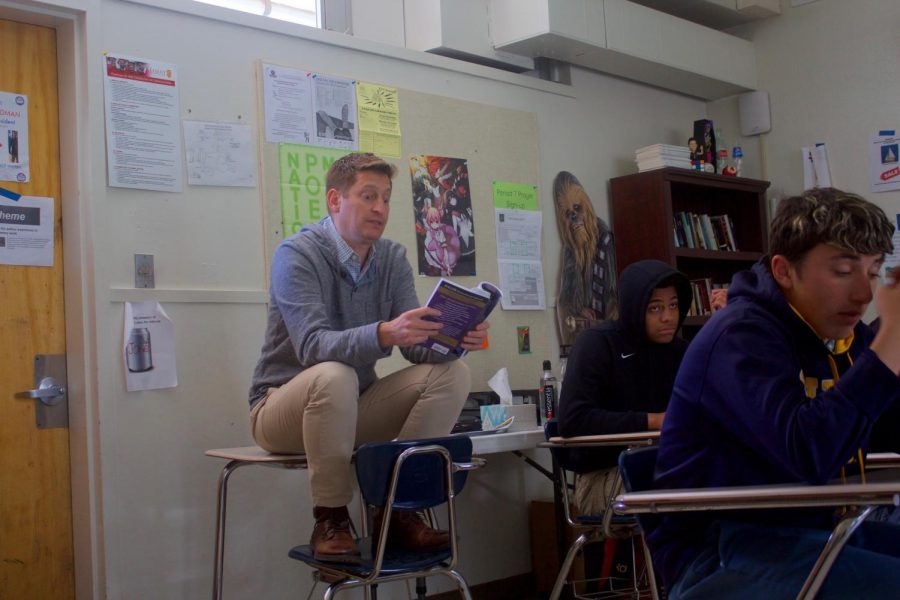 This year, Mr. Jeffrey Gans joined Jesuit High School’s staff as a member of the English Department. Mr. Gans moved to Sacramento from Seattle, Washington to accompany his fiancé. He now offers Jesuit his skills as a Freshman and Junior English teacher as well as a coach for JV Gold Soccer Team.

“We had heard great things about Jesuit from our friends in the area, so I was very excited to join the faculty and coaching staff,” said Mr. Gans.

Before Jesuit, Mr. Gans taught at University Prep and Eastside Catholic in Seattle. Now at Jesuit, he is excited to see that students are offered a variety of opportunities and activities in which to get involved.

“My last school was about a quarter of Jesuit’s size, so it’s fun to see students having so many opportunities,” said Mr. Gans.

Mr. Gans provides his students with great ways to explore and harness basic English skills. Practicing what he teaches, he captures the interest of Jesuit faculty by bringing his voice as a writer when teaching his students.

“He is very knowledgeable about how to be a good teacher,” said English and Department Chair Mr. Colin O’Connor. “I got the strong sense that he is a writer himself which was very enticing.”

Once at Jesuit, Mr. Gans saw an opportunity in developing student skills outside the classroom as a coach for the JV Gold soccer team. In his first year, Mr. Gans is already a crucial part to the success of Jesuit’s soccer program.

“Mr. Gans is a wonderful coach, ” said Michael Roush ’21, a member of Jesuit’s JV Gold Soccer Team. “His tenacity brings up the teams energy and helps us perform to our greatest ability.”

Off the field and in the classroom, Mr. Gans challenges his students to be the best version of themselves. His mission is to give them skills beneficial inside and outside of the classroom.

“I would hope that my students become better critical thinkers and stronger writers,” said Mr. Gans. “I would like for them to develop more awareness of their place in the world and a commitment to using their gifts to enact positive change.”

Both students and faculty are lucky to have such an ambitious new member of the Jesuit community. Given his brief time, Mr. Gans already has had a large impact upon students, establishing a solid impression on Marauders and staff members alike.