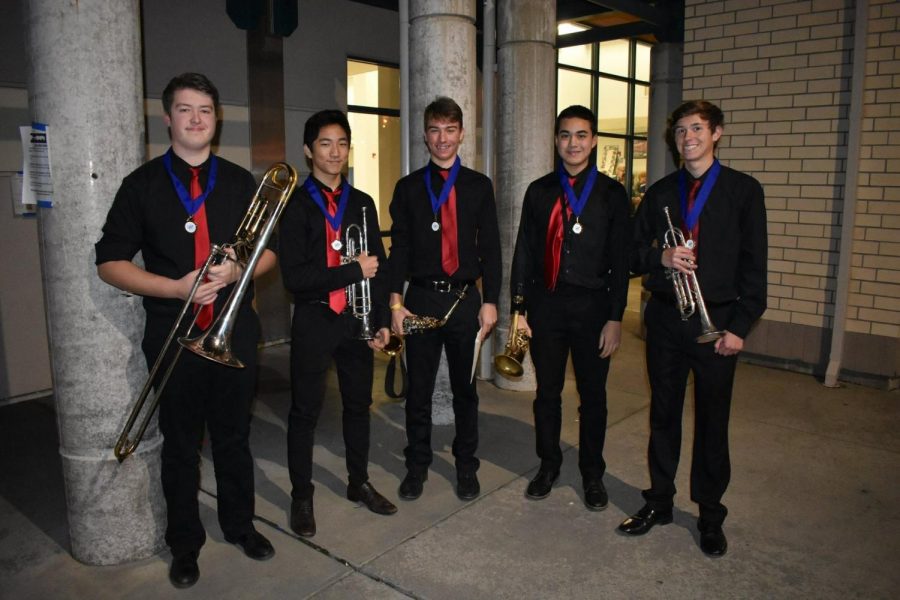 As students roam the halls of Jesuit High School, they may identify a familiar face in the middle of the Zielke Breezeway: Joe Turgeon ’19. Joe may not always be sitting on a bench or eating his lunch there, but a life size portrait of him always hangs above the benches. He stands with intent, focused on the instrument he holds with both hands: a bass trombone.

Beyond his hall of fame-esque portrait, Joe has also been recognized for something else. In early January, he was accepted into the prestigious Bands of America (BOA). In particular, Joe was selected for the jazz band, the smallest and most selective of the BOA bands. Consequently, Joe is considered one of the top bass trombonists in the country.

“After All State, I met a kid who said the National Band was a lot of fun, so I decided to go for it,” said Joe. “Later, when I heard the news, I was pleasantly surprised.”

Joe entered the music world in fourth grade when he first played trumpet on the St. Philomene school band. He switched to trombone at Arden Middle School, but not out of musical interest.

“What attracted me about the trombone was the slide, which is pretty cool,” joked Joe, “At Arden, I switched from trumpet so I could get a higher spot in the bands and hang out with my friends.”

His involvement with the instrument only grew from there. Besides school bands, Joe now plays for a professional band in Sacramento and in his own jazz combo with other students. He also has played multiple times for the All State Band, which is the state version of the National Band, and even worked for a sheet music recording company in Los Angeles.

“I’ve had the pleasure to work with Joe since he was at Arden Middle School,” said Jesuit Jazz Director Ron Cunha, “He is a fine bass trombone player who can also improvise, which is rare for that instrument.”

Indeed, the Jazz Band of America accepted an unique musician in their group of 20 students. This coming March, Joe will meet together with his peers for a week of rehearsals and a final performance.

“I’m pretty pumped to play alongside so many fantastic musicians,” said Joe.

After high school, Joe hopes to continue his trombone career throughout college and beyond. And one day, hopefully, we will see him featured on another wall, perhaps one outside of Carnegie Hall.