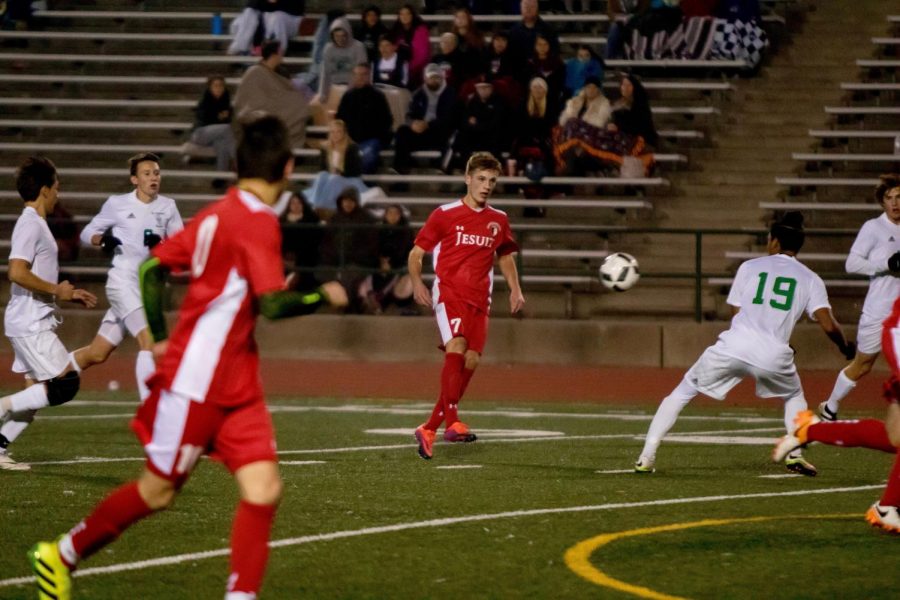 The Delta League’s two top soccer dogs, the Jesuit High School Marauders and Davis High School Blue Devils, are both playing well coming into their second matchup of the season, which will take place this Thursday, February 1st at 3:00 pm.

In their first matchup this season, a penalty kick by Jesuit attacker Jordon Vice ’18 broke a deadlocked 0-0 match late into the second half to give the Marauders a 1-0 victory.

Aaron, who sat out the previous matchup with a concussion, is probable to play in this meeting and will provide a strong test for Jesuit’s frontline with his size and physicality.

“Aaron is talented in the air and provides an added physical mentality to their team that they were maybe missing last game,” said Jack.

Jack and Jordon have combined for 25 goals this season and are both committed to play soccer next season at the Division 1 Collegiate level. Jack will play for Loyola Marymount University, and Jordon will play for UC Davis along with teammate Ayden Burnett ’18.

For Jesuit to prevail against Davis for the second time this season, the two will need to be in good form and provide the impetus for Jesuit’s goal-scoring pursuits.

“Jordon and I are going to need to take advantage of our opportunities in front of goal and look to get each other and our teammates involved.” said Jack. “If we do that, we should be fine.”

After shifting formations several times in the start of the season, the Marauders seem to have settled on an identity. Playing a 4-3-3, Jesuit will look to push the ball up the field at pace and hit Davis on the counter attack.

While the Marauders will need to have tactical discipline to succeed, keeping their emotions in check will be just as important. Both schools are long time dominant forces within the Delta League. With animosity running deep between the two sides, maintaining focus on the game and not letting the rivalry consume them will be vital.

“Focusing on things like controlling the midfield and playing disciplined soccer are what we need to care about,” said center midfielder Ryan Garvey ’19. “If we let personal emotions or little beefs get the best of us, then we could struggle and hurt our chances to win.”

A raucous atmosphere is expected for the game, which will take place at Capital Christian High School. The game will surely be an intense matchup between two formidable teams.