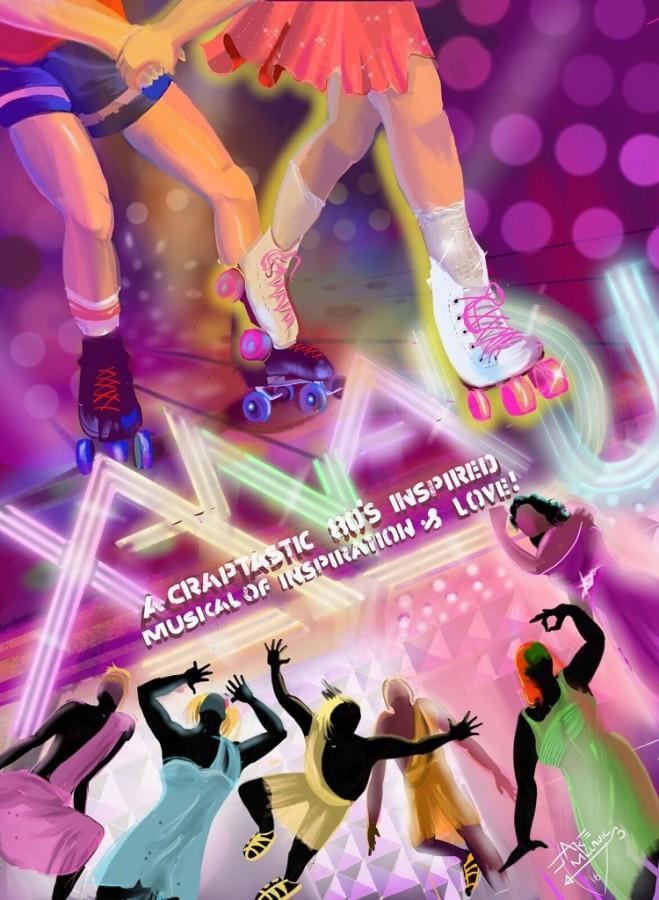 “My favorite part of the process was making new friends, developing relationships, and making an awesome show,” said Randy Stralen ‘17, one of the new members of the cast. “I was a little nervous going into it, but other than that, it was a great experience and we created something really, really cool.”

Xanadu is a musical based off of a 1980 film that tells the story of Sonny Malone, an artist in need of inspiration in the ‘80s. With the assistance of the Greek Muse Clio, who is determined to help build a roller disco that encapsulates all the arts in a singular place he overcomes a variety of trials based in both reality and myth.

The Jesuit Drama production also provided something that past shows in the Black Box have been without: a physical set. After multiple seasons of minimalist set design, the team at the Black Box broke the trend by building concentric rings around the stage.
The musical has a playful tone to it, constantly poking fun at itself and at the time period in which it takes place.

“It’s a non-stop comedy, and the jokes are a pain to work on, but it’s really rewarding to have the audience laugh at them,” said Madison Judd ‘16 from Bella Vista High School, who plays the character Aphrodite. “Hearing the same jokes over and over can get tiring, but they’re worth it.”

Overall, the cast of Xanadu put together a unique performance that kept audiences coming back, enough to sell out night after night. With the winter musical under wraps, the dedicated crew behind Jesuit Drama looks ahead to next year, which will be the 50th anniversary of Jesuit’s drama program.