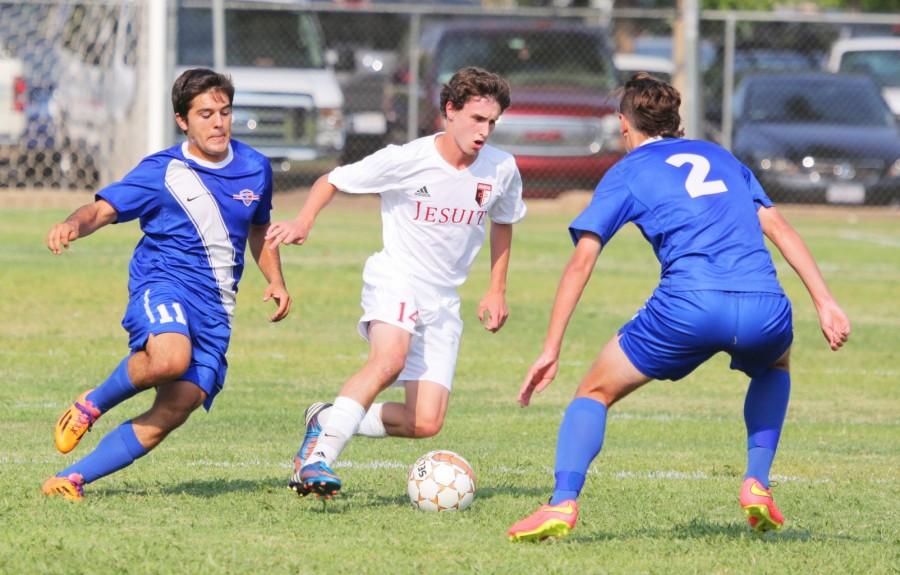 He started on the varsity side last year as a Sophomore, at the top of the CIF Sac-Joaquin league with 10 goals and 13 assists, a nearly unprecedented achievement for his age.

Lucas’ season fell short last year when he was injured in the playoffs against Bella Vista High School, sidelining him for the game against Oak Ridge High School, which the Marauders lost in penalty kicks.

“[Lucas’] injury was a key factor in our loss against Oak Ridge because we then only had a threat on the right wing to score,” said Mr. Paul Rose, Jesuit’s head varsity soccer coach.

Over the summer, Sac Republic Academy announced they were hosting open tryouts for their new academy team.

“I thought it would bring me more exposure, and that it was the best decision for me at the time.” Lucas said.

He made the team and earned a starting position quickly because he excelled in practice, scrimmages, and his two games in Seattle and Vancouver.

Despite his phenomenal performances, Lucas elected to leave the academy after just two months, and took a break from soccer altogether, neither playing for Jesuit nor his club team, Sacramento United FC.

“I wasn’t enjoying soccer as much there, and I miss[ed] representing my school,” Lucas said.

Academy players are not permitted to play any other sport while rostered on the team, including school or club soccer.

After a month leave from soccer and heavy contemplation, Lucas decided to return back to play for Coach Rose and the Marauders. For Coach Rose, it was not a difficult decision to let Lucas back onto the team this year.

“Besides being a great player, he is a great guy,” Coach Rose said. “Everyone on the team was excited to have him back.”

Because Lucas’ relationship with Coach Rose has grown, it became easier for him to return to the program.

“Our relationship has grown a lot because I have started to appreciate more what he does for me and the program,” Lucas said.

After winning his first section championship as a Marauder, Lucas has a very bright future.  He will start club soccer with Sac United, continue playing for Jesuit next season, and then explore his options for college soccer.

“I’m thankful that Jesuit welcomed me back with open arms and I look forward to continuing my Jesuit soccer career, and I am also grateful for the opportunity the Sac Republic Academy offered me, as well as the coaches and players there,” Lucas said.