Marauders get lost on the Monterey Trail 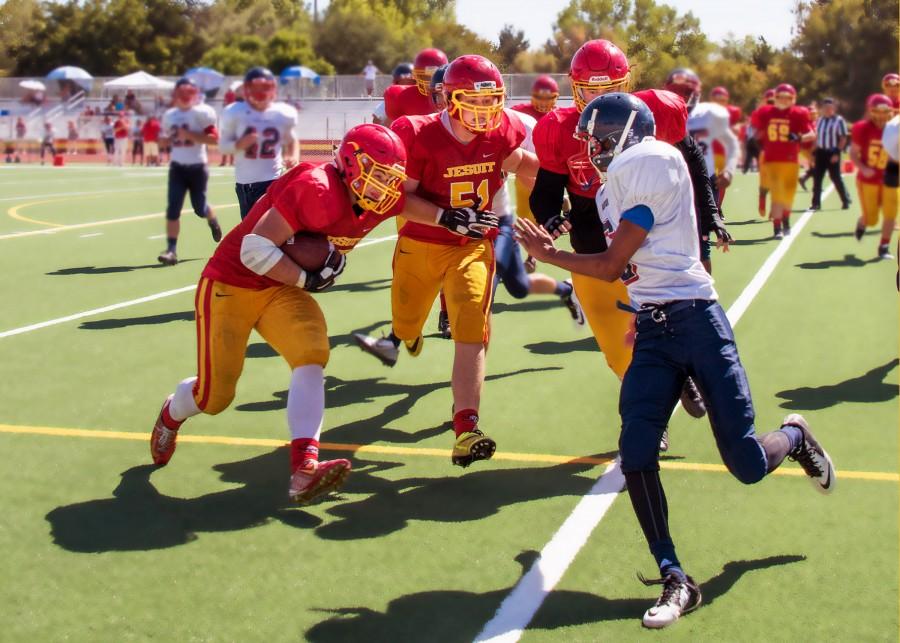 Last Friday night, the previously ranked Jesuit Marauders (18) lost on the road to the unranked Monterey Trail Mustangs by a score of 23-3. This conference game put Jesuit at a 5-4 overall record, and put their away record to 1-3 and league record to 3-3.

Not long after this field goal, Monterey Trail marched their way down to Jesuit’s end zone, and scored off a 17 yard pass. This was the last score of the half, making the score 14-3 Mustangs.

The Mustangs kicked off to the Marauders to start the second half. Not until the fourth quarter did the Mustangs add on two more touchdowns, ending the game with a score of 28-3.

After two weeks of healing an injured ankle, Jesuit running back Beau Bisharat ‘16 returned to full action. He rushed for a total of 44 yards on eight carries and caught three passes for 41 yards.

Because of this loss, the Marauders will have to beat Grant High School (2) on Friday in order to claim a playoff spot. Grant has a record of 8-1 and is second in league.

“We are just practicing to get ready for their athleticism,” said cornerback Kamau Carter ‘17. “If we don’t win, we don’t go to playoffs, so we are treating this game like a playoff game.”

The Marauders will travel to Grant on Friday in their final delta league game. With the Marauders having no more losses to spare, this is a win or go home situation.