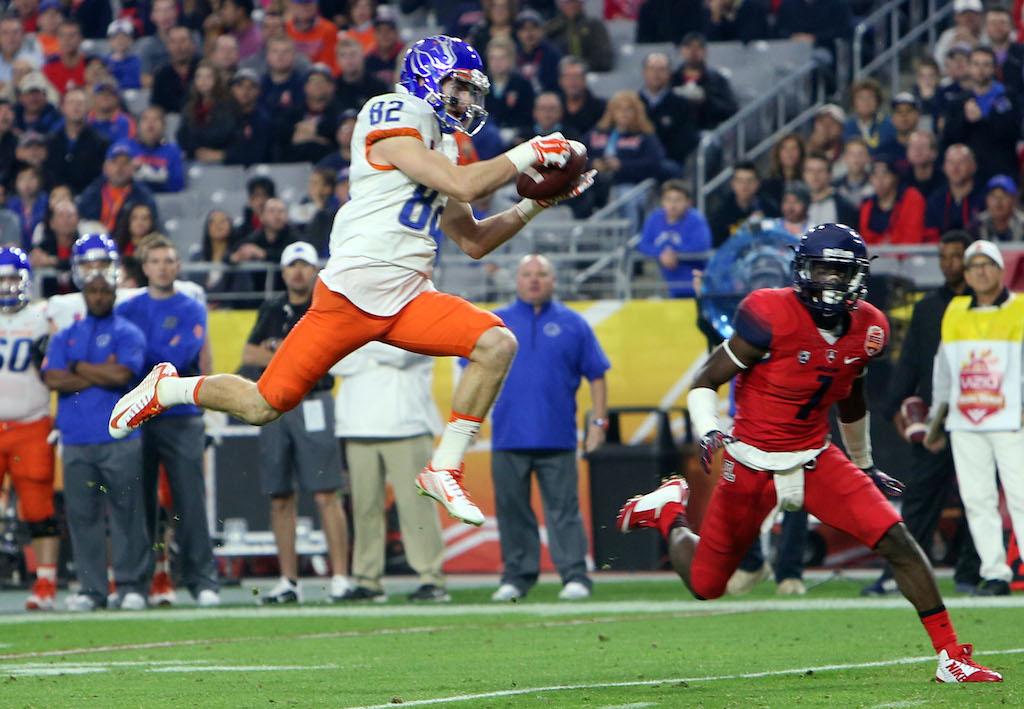 Boise State wide receiver Thomas Sperbeck (82) makes a first-half reception against Arizona in the Vizio Fiesta Bowl at the University of Phoenix stadium on Wednesday Dec. 31, 2014. (Courtesy of Joe Jaszewski )

Boise State wide receiver Thomas Sperbeck (82) makes a first-half reception against Arizona in the Vizio Fiesta Bowl at the University of Phoenix stadium on Wednesday Dec. 31, 2014.

As a college preparatory school, Jesuit High School has earned its great reputation by preparing its students for the transition to college. Jesuit alumni seem to be frequently crossing paths at Boise State University.

Even though Jesuit and Boise State are miles apart, the two schools may not be as different as their locations would suggest.

Arguably one of the most recognized Jesuit alumni to go to Boise State is Thomas Sperbeck ‘13, a current sophomore and football player for the Boise State Broncos. Mr. Sperbeck says that there are many similarities between the two institutions.

“Academically, I was able to transition a lot easier than most of the students here because of how Jesuit pushed me to meet due dates and think outside the box,” Mr. Sperbeck said.

Mr. Sperbeck, who plays wide receiver for the Broncos, stressed that learning the fundamentals of the game in addition to hard work and discipline at Jesuit’s football program helped ease his transition on to the big stage.

“I was always taught by Coach [Marlon] Blanton at Jesuit that we can win any game by our hard work in the off-season, team chemistry, and knowledge of the game plan.  At Boise, our football team is known for being blue collar, which can definitely relate to the hard work in the offseason,” Thomas said.

Mr. Sperbeck is a sophomore at Boise State, but that hasn’t stopped him from building an impressive athletic resume being named the offensive MVP in 2014-2015 Vizio Fiesta Bowl against the University of Arizona.

“The Fiesta Bowl was a once in a lifetime experience for me. Any game on that big of a stage is an amazing experience, win or lose. I’m just happy we got the win and ended the season on a right note for the fans and the seniors on the team,” Mr. Sperbeck said.

Another alum of Jesuit, Mr. Joe Jaszewski ‘98, is the in-house photojournalist for the Idaho Statesman headquartered in Boise, ID. Mr. Jaszewski believes that his days as Editor-in-Chief of The Plank and a staff member for The Aggie (UC Davis) played an instrumental role in shaping his past.

“I owe The Plank, and then-moderator Fr. John Quinn, so much in paving the way for my career and life in general,” Mr. Jaszewski said.

As a photojournalist for The Statesman, Mr. Jaszewski does a lot of video work for the paper, but primarily covers Boise State football.

Mr. Jaszewski says there are many similarities between Boise State and Jesuit in their uniqueness and pride.

“There is a lot of Jesuit pride, and a lot of Boise State pride. I think that comes from

being somewhat unique in who they are,” Mr. Jaszewski said. He’s not the only one who feels this way.

Senior Connor Bell ‘15, a varsity golfer at Jesuit, has also committed to Boise State where he plans on translating his skills gleaned at high school practice, onto the collegiate level.

“My goals are to make the traveling team as a freshman and establish myself as one of the top players so I can travel to all the tournaments,” Connor said.

Jesuit is continuing to create “Men For Others” who are prepared to continue their success onto the next level. Even though the transition to college may be a big leap, Jesuit continues to provide a foundation for future academic and athletic success.