The dream behind the theme

Founded in 1963, Jesuit High School has continuously fostered an identity of two key components: the spirit of a Marauder and a “Man for Others.” Jesuit students accept these tenets as part of their daily life, but few students know how Jesuit’s ideal image for its attendants came to be.

One particular question about this history has interested Jesuit students, parents, and teachers: why does an organization of priests identify with pirates, men infamous for pillage and murder?

Members of the Jesuit community know that in the early 1960’s Jesuit contended with the San Juan Unified School district to secure its location, but they may not realize that Jesuit’s iconic Marauder mascot was inspired by the Rio Americano High School Raiders.  Jesuit wanted a way to clearly distinguish itself from Rio, while still relating with the nearby river.

“I was told that ‘Marauders’ could mean ‘River Pirates’ and so the mascot was chosen to distinguish us from Rio, yet keep the association with the locale of the American River,” said Father Edwin Harris, S.J., former president of Jesuit and the namesake of Jesuit’s Fr. Harris Student Life Center. 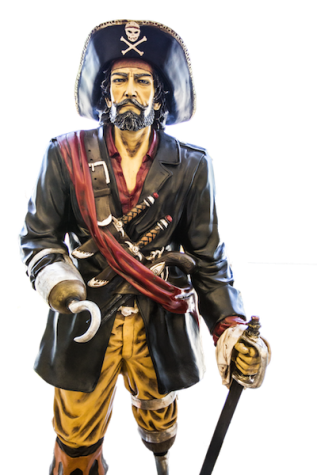 As iconic as the pirate itself, Jesuit’s yellow-gold and scarlet colors are found on everything from pencils to football helmets; however, Jesuit’s original colors were black and yellow. Then, the graduating class of 1967 voted to change the colors to a traditional gold and crimson. Unfortunately, because of the constraints on the colors offered by sportswear companies, the colors were changed a second time to scarlet and yellow-gold.

Jesuit uses the Marauder to propel student body morale and spirit, too. Jesuit’s motley crew of athletes, scholars, artists, faithfuls, and countless other personas unite under the emblem of the “Marauder,” a symbol that combines all sorts of youth with its connotation of rough, sea-faring brotherhood.

The final piece of the Jesuit identity, the “Man for Others,” was a theme presented by the Jesuit Superior General Fr. Pedro Arrupe, S.J. at the World Jesuit Alumni Summit in Spain in 1973.  The theme was subsequently adopted by Jesuit institutions all around the world.

“Before that, we were just a rigorous Jesuit college preparatory school. [Faith] wasn’t part of [it],” Mr.Tim Warren ‘70, Dean of Students at Jesuit High School said.

Today, Jesuit challenges its students to become “Men for Others” through their actions around campus and Christian Service in the community.

Fr. Harris says that this image has impacted students.

“I think that the students have always been receptive to engage in a ‘higher cause’ and to be inspired to become better…it has always shown itself in spirit and in service,” Fr. Harris S.J. said.

Through the concepts of Marauders and “Men for Others,” Jesuit continually works to shape brotherhood and compassion. The dream behind these themes is that fully formed “Men for Others” will better the world by assisting those in need and tackling every action with a reinforced sense of moral responsibility and duty.