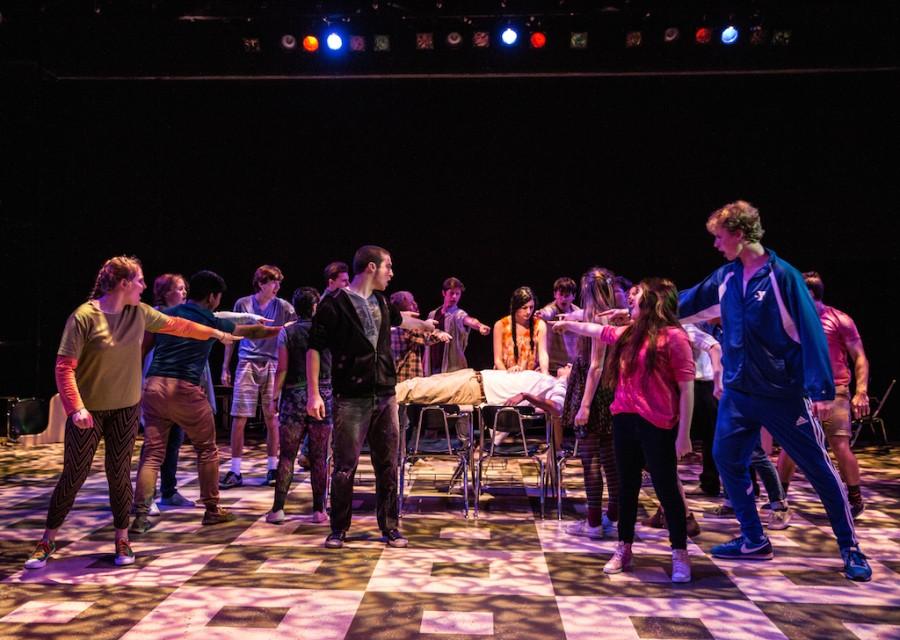 Once on this Island opened Thursday, March 12 to a full house of patrons and parents to see the Winter Musical.

Ti Moune finds herself in love with Daniel, but faces obstacles in this love. She must deal with Papa Ge, played by Jesuit senior Greyson Horst, who is the God of Death that tries to prove to Erzulie, the Goddess of Love, played by Saint Francis High School junior Elizabeth Perlas, that death will overcome love.

This love, though present, is a forbidden love and destined to fail. Ti Moune, a peasant girl, and Daniel, born into royalty, are not meant to be together.

Ti Moune travels to Daniel and shows him her love, only to find out that Daniel is to be married to Andrea, played by Saint Francis freshman Jillie Kate Randle.

Daniel and Andrea are married, and Ti Moune dies of heartbreak and is turned into a tree by the gods at the gate. The tree breaks the gate and destroys the separation of the rich and the poor. This shows that love overcame death in the end.

This love was not only showed on stage, but also showed on March 13 with the “senior night” show.

“We have never had [‘senior night’] happen before but lovely that it happened,” said Play Director Mr. Edward Trafton ‘84, “We have always had enthusiastic crowds, especially from classmates, but this year’s senior class stepped it up and we are grateful.”

The senior class this year showed up with spirit, bringing blown-up photographs of the actors’ heads to the show. The crowd was very enthusiastic and cheering for virtually everything that went on during the show.

“Getting that much support from classmates gave [us] a boost that helped our performance,” senior actor AJ Randhawa said.

This boost gave energy to the performance and gave the actors and actresses a sense of what they are working for.

“The senior night gave me a good feeling of support from classmates and made me feel like I was performing for a purpose,” said senior actor Charlie Lawver.

This year’s “senior night” was not the only new addition to the play; the new sound perch was built behind the seats for the sound board.

“The focus for this show was building the new sound perch and lights,” said senior Tech Crew Member Mitchell Johnson.

The lights were an integral part of the show. The tech crew flicked the lights on and off to simulate lightning with the sound of thunder, changing the lighting with new scenery, and moods were enhanced with different hues of color.

The winter musical featured students from Jesuit High School, St. Francis High School, Rio Americano High School, and Bella Vista High School. These schools worked together to bring a show on stage for all to see.

These actors and actresses not only worked together to bring a great performance to the audience, but also worked to give back to their local community.

This year, donations of art supplies were asked of audience members to benefit Sutter’s Children’s Bereavement Art Group. They assist kids ages 4-18 who are suffering through grief of a loved one who have lost their lives.

Great acting, bringing schools together, and giving back to the community make Jesuit High School’s Black Box such a unique production staff.