Carrying on the aquatic excellence 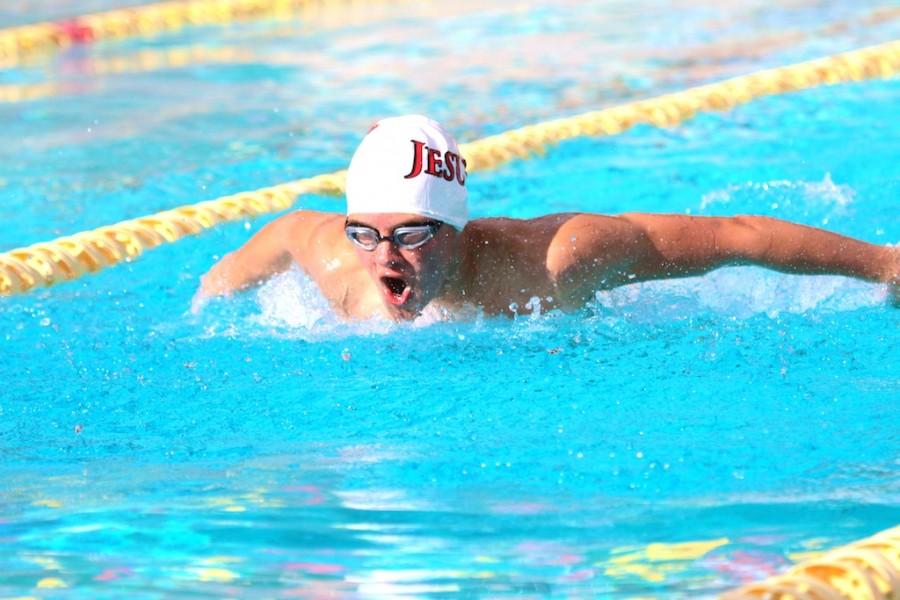 After winning the Delta League last year and finishing 3rd in the CIF, the Jesuit Swim Team looks to continue its long tenured success against some of the area’s top competition this year.

Varsity Head Coach Mr. Mike Solander, who has now been coaching the team for 11 years, looks forward to this season and replicating the team’s successful season from last year.

“I think we will be one of the top teams in the area.  Our biggest competition so far this season will be Davis, but I am predicting that we will still finish well in the tournament again,” said Coach Solander.

This year, the team will be gathering some of the school’s top talent in order to achieve the same accomplishments from a year ago.

Overall, last season’s team had a very good year, but this year’s squad is hungry for more and looks to achieve even more accolades. By the end of the season, the varsity swim team hopes to be raising another banner to add to an already banner-filled gym.

Senior Drew Lewis has now spent four years swimming for Jesuit and thinks that the team looks to be solid this season.

“I think that the team as a whole looks very good,” Drew said.  “There is a lot of up and coming talent to make sure that future teams will be successful for many years to come.  I, personally, am hoping to build on what I did last year and to do as much as I can to make sure our team will be Delta League champs again.”

Senior Will Peterson, who will be entering his third year of swimming at Jesuit, thinks that the up and coming talent will be the showcase this season.

“There are only a few senior leaders this year.  However, there are a lot of freshman and sophomores, who really want to get out there and showcase their talent,” said Will.

Jesuit has always had a long tradition in athletic excellence and swimming is no exception.  Building off a stellar season last year, the team has high aspirations to find the same success.  With so much talent on the roster this year, it would be difficult to think that they couldn’t.