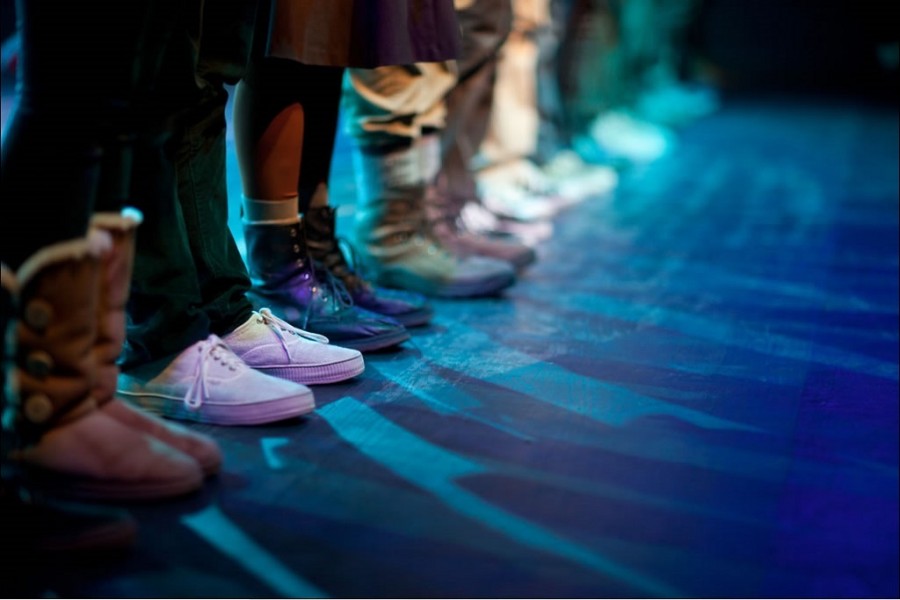 An air of enthusiasm and excitement hung over the Black Box Theater as students from Jesuit, Saint Francis, Christian Brothers, and Mira Loma all congregated after school on December, 2. During this assembly of students from a variety of schools, Mr. Ed  Trafton, Jesuit Drama’s Artistic Director, announced the upcoming Winter Musical, Once On This Island.

Showing eleven times from Mar. 12 to Mar. 29, Once On This Island is a one-act musical with a book and lyrics by Lynn Ahrens and music by Stephen Flaherty. It was based on a novel written in 1985, known as My Love, My Love; or, The Peasant Girl by Rosa Guy, and both the stage production and written version depict the tale of a girl who uses love to bridge social divides.

Mr. Trafton referred to this year as “The Year of Storytelling,” speaking of how the new musical had a heavy focus on telling stories in a parallel with the fall play, The Encyclopedia of Early Earth.

This year, faces both familiar and new stood out among the enthusiastic crowd listening to Jesuit’s Artistic Director as he explained the play’s strange roots in the original fairy tale known to some as The Little Mermaid.

The reasons for the newcomers’ participation varied, from having friends who had worked in drama, to being awed by the last performance. With each new production, the Jesuit Drama Department strives to provide a fresh, new take on classic tales, or to even make new ones. According to Mr. Trafton, there will be a unique twist to the performance.

Nevertheless, despite the aura of secrecy that lies around whatever way the story might be reinvented, everyone in the audience appeared to be both excited and intrigued, and spirits were high in the Black Box Theater that afternoon. No matter what way the story ends up, future audiences of Jesuit Drama’s performance of Once On This Island will likely, as in the past, find themselves in a dazzling and wonderful story.

For students interested in participating in the musical, tryouts will take place Wednesday Dec. 10 and Thursday Dec. 11.