Marauders fall to the Bulldogs 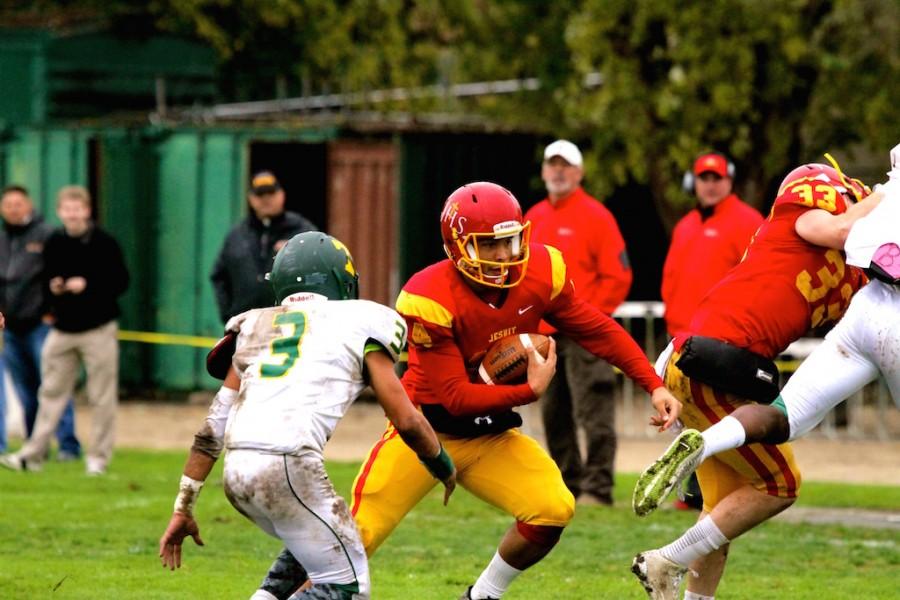 On Nov. 22, the Jesuit High School Marauders played the Tracy High School Bulldogs in the second round of the San-Joaquin High School Football playoffs. The game was extremely close, as both the Marauders’ and the Bulldogs’ offense dominated each others’ defense.

The game started off poorly for the Marauders. On their first possession they fumbled the football and lost possession. Tracy capitalized on the mistake from Jesuit, and scored the first touchdown of the game. This ended up being the only score in the first quarter, making the score 7-0 in favor of the Bulldogs.

Jesuit quickly recovered from a bad start with a touchdown from junior running back junior Beau Bisharat during the first minute of the second quarter. From this point on, the game became a scoring frenzy for both teams. The Bulldogs responded with another touchdown five minutes later. Tracy’s kicker missed the PAT making the score 13-7, Tracy leading.

The Marauders fired back with another rushing touchdown from Beau. Tracy blocked junior Lucas Thayer’s PAT keeping the game level at 13 apiece. Jesuit then proceeded to hold off the Bulldogs’ offense. Jesuit tacked on another touchdown when senior Cole Brownholtz threw a the ball to senior Isaac Lessard. The score was then 20-13 in favor of Jesuit, and it would end the half as such.

Tracy started the second half with possession and quickly scored a 57 yard touchdown pass to a wide open receiver in just under two minutes. After the touchdown, the Bulldogs set up to kick the ball off, and they attempted an onsides kick. The Marauders were not expecting this, and were lucky to recover the kick as the ball was first touched by Tracy.

The scoring subsided for a couple of possessions until senior Isaiah Bailey returned a punt for a touchdown. This score got the Jesuit football team pumped up.It looked like they would keep up the pressure on the Bulldogs. Tracy again blocked the PAT of Lucas making the score 26-20 with Jesuit leading.

The Bulldogs’ morale was not hurt after Isaiah’s touchdown as they quickly moved the ball forward and scored another touchdown off of a 47 yard pass. Jesuit came back with another big possession and scored a 44 yard touchdown pass from Cole to Isaiah. Since two of the marauder’s last three PAT’s were blocked they decided to go for two, but failed to convert it. The score was now 32-27 in favor of the Marauders.

On Tracy’s next possession they struggled to get their offense going, and they were forced to punt. Isaiah caught the punt on the 25 yard line and proceed to blow by the Bulldogs’ players. He returned the ball for his second punt return for a touchdown. Jesuit again went for the two point conversion, but they were stopped just short of the goal line. The score was now 38 to 27 and it looked as if Jesuit would cruise to an easy win.

Tracy’s demeanor was negative as they stepped on to the field down by 11 points, and they had struggled offensively the last few offensive possession. The Bulldogs began to pick their game up and they scored with 10 minutes left in the fourth quarter. After a successful two point conversion, the score was now 38-35 with Jesuit holding on to a slim lead.

Jesuit walked down the field and appeared to have another easy score until a holding and offensive pass interference caused the Marauders to move backwards. Jesuit now had to move 35 yards to gain another first down. They did this off of a big pass play from Cole to Beau. The Marauders were stopped on third and goal after a fumble from Cole, but he recovered it. Instead of going for a field goal Jesuit decided to go for it on fourth and goal. Cole fumbled the ball again and it was recovered by Jesuit, but they lost possession of the ball.

This mistake gave Tracy the chance to win the game. The Bulldog offense was unstoppable as it took the ball almost the whole length of field to score a touchdown to take the lead. The score was 42-38 giving Tracy back the lead.

Jesuit now had 2:10 left on the clock and two timeouts to score a touchdown. Unfortunately, Cole was forced to throw a rushed pass that was intercepted. The game would finish with a final score of 48-38 with the Tracy High School Bulldogs coming out on top. They will move on to play Granite Bay High School Grizzlies on Nov. 28.

It was a tough loss for the Marauders to take as they had hoped to reach the section finals to have a rematch of last year’s final game against the Folsom High School Bulldogs. Unfortunately they will not have the chance to rematch Folsom, as they finish their season with a record of 9-3.