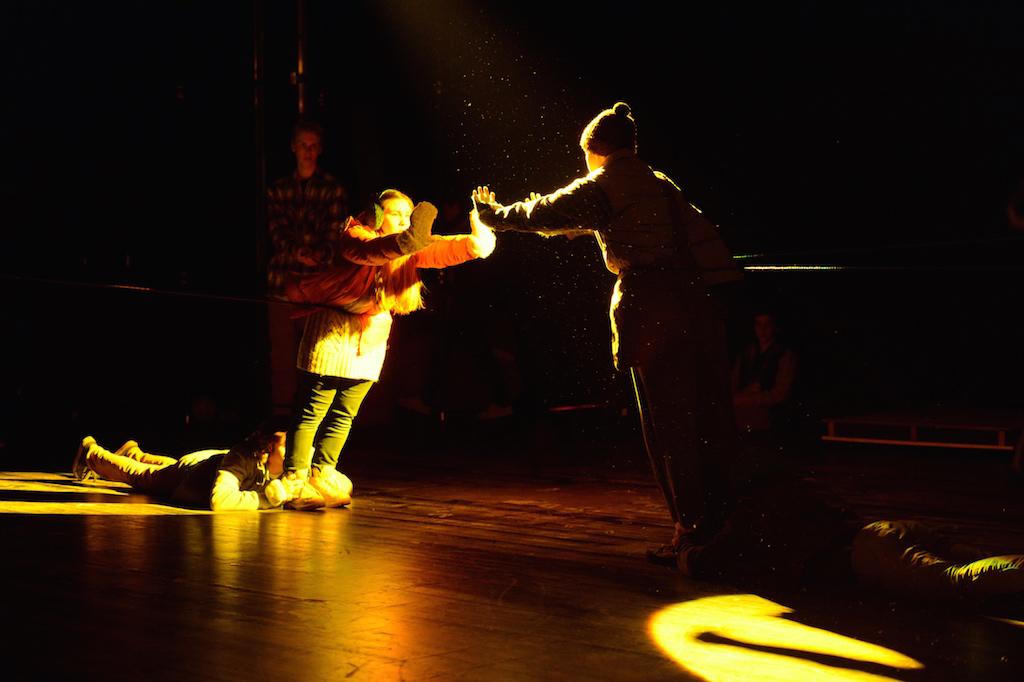 The Encyclopedia of Early Earth

To start off their 48th Anniversary Season, Jesuit Drama performed The Encyclopedia of Early Earth (or Love in a Very Cold Climate) from Nov 6-Nov 16.  The play is based off of the graphic novel of the same name by Ms. Isabel Greenberg.

The show was an intense contrast from Jesuit Drama’s most recent production of Beauty and the Beast.  The cast of over 50 actors for the Disney musical was much greater than this year’s cast of nineteen. While the small cast allowed for more depth, it also required a higher level of commitment. Daily rehearsal ensured that the actors reached their full potential. From seasoned veterans like senior Nic Crumley, to newcomers like junior Travis Bell, every member of the cast had spent months preparing.

The story follows a young man (played by junior John Novotny) from a land called Nord, who, after a piece of his soul goes missing, travels across Early Earth to the South Pole to find the rest of his soul. 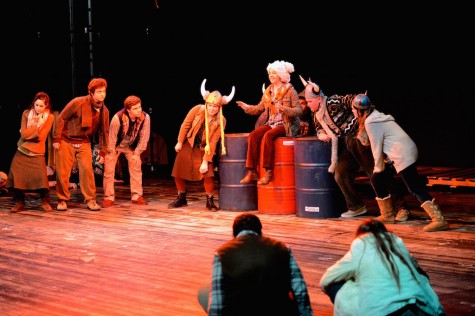 The Nord specializes in the art of storytelling, so he is fascinated by the new stories and histories he encounters on his journey.  On his way across the globe, the Nord witnesses the great city of Migdal Bavel, the warrior clan of the Urgs, and the inside of a magnificent magical whale.

While the young Nord’s primary goal was to find the missing piece of his soul, he enjoyed the journey just as much as the goal.  His adventure was filled with love and heart, which was what Jesuit Drama sought to capture in their rendition of the story.

“Throughout the two months of rehearsals, we had three main topics that we tried to focus on when transforming her work into a theater production. The topics were ‘What’s the predominant element?’ ‘Where’s the heart?’ and ‘Where’s Isabel?’” said senior Charlie Lawver. 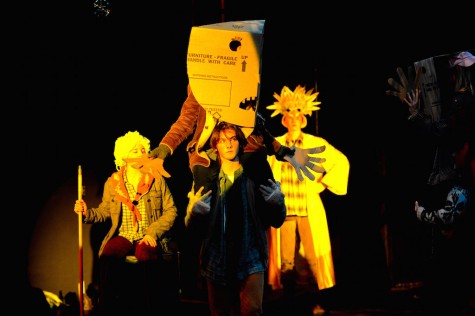 “The human set pieces and overall feel of the play helped clearly define the focus of the production, the actors. We tried to define the predominant element of the show, deciding that it was not spectacle but character that was most important” said junior John Novotny.

Jesuit Drama’s Artistic Director, Mr. Edward Trafton, along with Costumes and Associate Director,  Rachel Malin, spent hours refining the aesthetic details of the play. Tech crew members like senior Ryan Rafeld and St. Francis junior Courtney Clark worked alongside the actors to perfect the lighting as well as the sets and costumes. For the sets, objects such as oil barrels and light bulbs were used to capture the playful spirit of Ms. Greenberg’s novel.

“We wanted to stay faithful to the book and we did not want to distract the audience with a full set. Instead, we wanted to stay with the simplicity of storytelling, as the book is a story being told.” said senior Tristan Miller.

Minimalist approaches were taken towards the set and props, which served to bring out the colorful cast and characters of the production.  The story traversed the entirety of a world, so characters ranged from eccentric bird gods to primordial warrior clans.  The cast and crew captured the different colors and flavors of these varying characters and lands using themselves, household items, and creative lighting and sound.  Without the weight and presence of traditional props, the cast had greater freedom to tell a story. 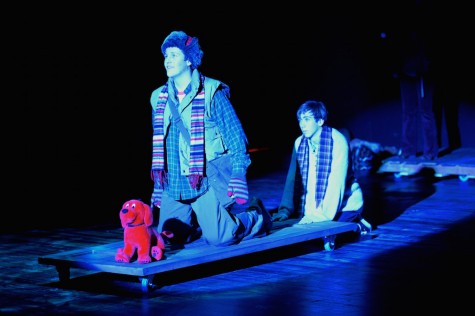 Ms. Greenberg has been celebrated by critics for her debut graphic novel, The Encyclopedia of Early Earth. Named one of the best books of 2013 by both National Public Radio and Time magazine, the novel tells the story of two lovers’ attempts to connect, despite the interference of meddling gods. Inspired by Greek mythology, the novel focuses heavily on storytelling which is what led the Jesuit High School Drama Department to select the story for this year’s fall play.  Because of its unique composition, the people at Jesuit Drama strived to present the story as close to the original text as possible, while breathing their own life and spirit to accompany the spirit of Ms. Greenberg.

“We were trying to include as much of her original work as we could while still making it our own. We were all so charmed by her book that we fell in love with it instantly, and had the mindset of ‘why change what shouldn’t be changed?’” said Charlie.

When Ms. Greenberg arrived at the Black Box Theater, she was met by the cast and received with much fanfare.  The cast and crew had the opportunity to speak with Ms. Greenberg about her book and her career as an author.  Afterwards, she went to see the show.  After the performance, Ms. Greenberg graciously stayed and spoke with the audience.

“I had no idea what they (the company) were going to do…I was completely blown away.” said Ms. Greenberg.

Seeing Ms. Greenberg and hearing her reactions to the show excited both the audience and the company.  While it was a massive under taking and success for Jesuit Drama, The Encyclopedia of the Early Earth will live in the hearts of everyone who witnessed it because of its special connection to a woman in London.