Where practice can take you 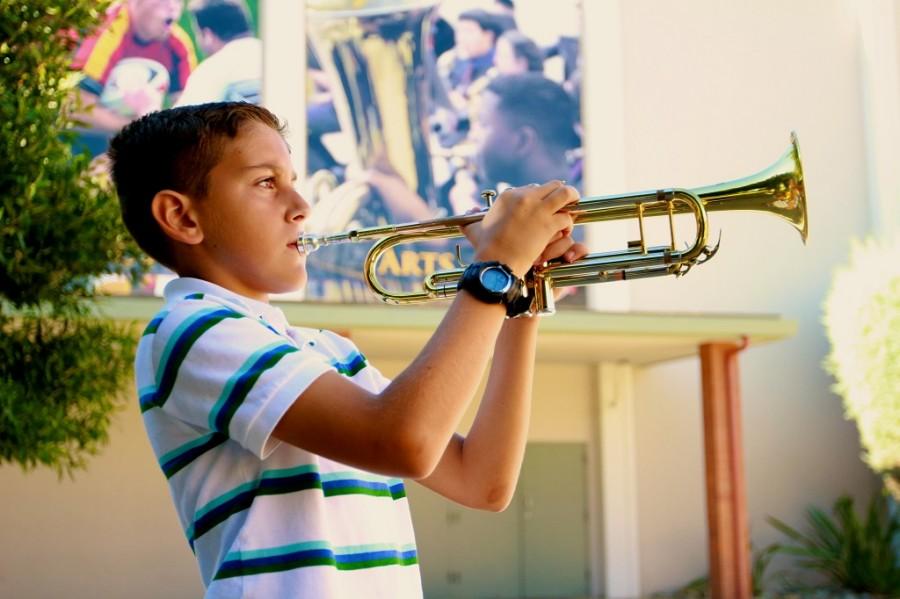 Freshman Tyler Smith is not an average trumpet player. A little more than a month at Jesuit High School, and he is already a player in two of Jesuit’s highest level wind ensembles. Tyler’s story begins at Mariemont Elementary School.

Tyler’s first experience with a trumpet was in third grade, when he began playing in his elementary school’s beginning band program. He did not choose to play the trumpet for any particular reason, but recalled that he had a few friends who were playing trumpet, and decided to try it too. As the years went on, most of his friends dropped out of band until he was “one of the few elementary kids that stuck with it.”

Tyler then went on to Arden Middle School. While at Arden, Tyler played in the intermediate, advanced, and jazz bands. When it came time for his eighth grade year, Tyler played in Arden’s advanced band and Jazz Band, the two most prestigious bands at the middle school.

Eventually, the time came for Tyler to decide where he wanted to go to high school. Arden is a district feeder school for Rio Americano High School, and teachers from the Rio’s band program came to Arden to tutor students during Tyler’s middle school years. For many of his peers in Arden’s Jazz Band, the decision was absolute: they were going to Rio. Tyler decided otherwise.

“It was kind of weird for me being the only kid [I knew] going to Jesuit,” Tyler said.

After the application and admittance process, it was official: Tyler was headed to Jesuit. As soon as he arrived, he auditioned for both the Symphonic and Jazz bands and got into both. The two ensembles are Jesuit’s most advanced instrumental groups, so freshmen are not admitted into them very often. But Tyler was able to meet the challenge, and hold his own against sophomores, juniors, and seniors.

Tyler is one of only two freshmen in both the Jazz Band and the Symphonic Band. Despite being surrounded by many upperclassmen, he isn’t deterred in the slightest.

“I feel like I’m one of the [guys], even though I’m just a freshman. Being a freshman doesn’t really change anything,” Tyler said.

Tyler commented that Symphonic Band truly flourishes during the eighty-minute long periods. He said that extended practice periods give musicians plenty of time to fully develop sections of a piece without having to break, as he frequently felt rushed practicing during shorter periods at Arden.

“When you first come to Jesuit, make sure to get involved in plenty of clubs because you may find you’re interested in something that you never thought you’d like. If you choose to go down the music path at Jesuit, you won’t regret it,” said Tyler when reflecting on his early involvement at Jesuit.

Tyler’s place in the music program certainly shows that many long years of practicing can allow any talented individual to flourish at Jesuit. He is just one example of the talented students the Jesuit community is blessed to have.